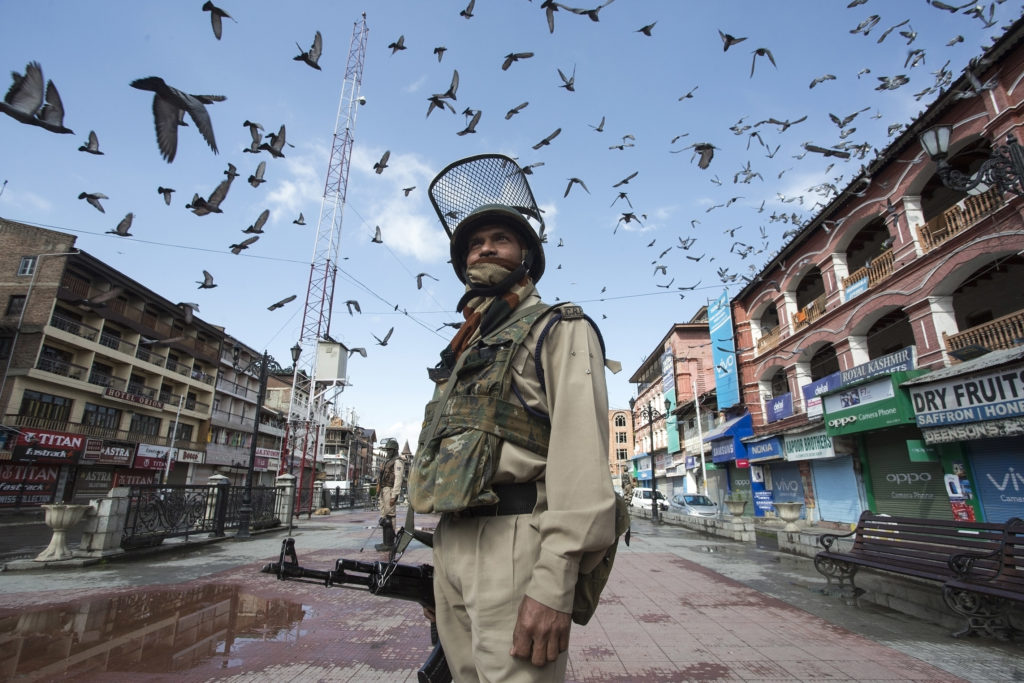 Complete shut down was observed in Kashmir to mark the death anniversaries of hurriyat leaders. picture Abid bhat

A complete strike was observed in Kashmir while as authorities foiled ‘Eidgah Chalo’ called by Joint Resistance Leadership (JRL) by imposing restrictions in parts of Srinagar.

The JRL has called for the protest and the march to commemorate the death anniversaries of Mirwaiz Molvi Farooq and Khawaja Abdul Gani Lone.

A huge contingent of police and paramilitary were deployed in almost majority of uptown and old parts of Srinagar city.

The educational institutions had already cancelled their examinations scheduled for Monday.

Witnesses said that the government forces had erected temporary barricades on the roads, halting the vehicular as well as the pedestrian movement in the restriction bound areas.

Besides, a complete shutdown was observed across the Valley to commemorate the martyrdom anniversary of Mirwaiz Molvi Farooq and Khawaja Abdul Gani Lone.

All the shops, business establishments, educational institutions, petrol pumps and other things remained closed throughout the day while as the vehicular movement was also thin on the roads.

A top police official said that the situation across the Valley remained peaceful and under control throughout the day.

In a separate statement, JRL stated the strongly condemned the ruling regimes decision of imposing toughest curbs and restrictions in downtown Srinagar and other parts of the city terming it as acceptance of defeat.

The leadership said that the complete shutdown observed by the people across the Valley amplifies their commitment to the mission of the martyrs and the ongoing movement and their pledge that no matter how tough the repression goes, people will continue to strive for their rights till the final goal is achieved.

JRL condemned in strongest words the stringent curbs imposed in entire downtown by the government to foil the Eidgah rally where leaders and people would pay tributes to the martyrs and reaffirm their pledge, stating that the ruling regimes fear of peoples power and commitment towards  the freedom struggle makes them take these totalitarian measures .

The ruling regime doesn’t have the courage to meet us on political turf, the JRL added

JRL said that no matter how far Delhi and its “local collaborators” go in unleashing repression upon people, people have shown that they will continue to follow the cause for which the martyrs sacrificed their life and will at all cost resist the New Delhi’s military might with full strength.

JRL expressed its regret and anguish over the ruling regimes measure of barring congregational fateh khawani at the martyr’s graveyard since the past eight years by use of extreme force and imposing strict curbs in majority of downtown areas.

They said that such inhuman measure exposes the stooges and their masters that they do not even allow us to offer Fateh for our dead and visit their graveyard on their martyrdom day.