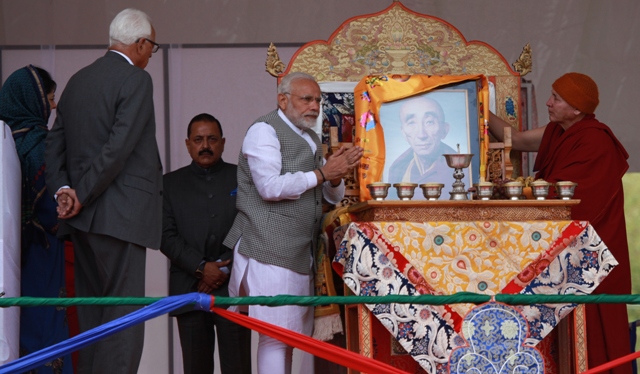 Srinagar: Stating that Kashmir issue cannot be solved by “bullets or abuses, but only by hugs, the Prime Minister Narendra Modi Saturday appealed the Kashmiri youth who have joined violence to return to their homes and live a life of dignity and peace.

“Atal Bihari Vajpayee was fond of Kashmiriyat and so is Modi. I have said it, neither abuses not bullets will solve the problem Kashmiris are witnessing. The only solution is hugging and loving Kashmiris, “ said Prime Minister Modi while addressing an official function here at Sher-i-Kashmir International Convention Centre (SKICC) here in Srinagar where he inaugurated the 330mw Kishenganga Hydel Project and also laid foundation of Srinagar Ring Road,

The Prime Minister applauded those Kashmiri youth who have joined violence and have returned to their homes to “live a life of dignity and peace”.

Without naming any country, he said that those who have been helping “violence in the state from across our borders are themselves disintegrated this time”.

“We have to respond to those vested interest powers, who incite the Kashmiri youth towards violence. We have to move ahead. The responsibility of taking forward the development process and increasing the pride and honour of Jammu and Kashmir lies on this young generation,” the Prime Minister said.

The Prime minister claimed that ceasefire was a “slam” to those who incite the youth towards violence.

“Cases have been withdrawn so that these misguided youth live a dignified life and ceasefire is to provide relief to the people,” he said.

Prime Minister Modi said that his government is working for the ecosystem that is required for the development of tourism in Kashmir.

“There will be an increase in tourists in J&K with a stronger ecosystem. The youths of the state will get new employment opportunity with it,” he maintained.

The Prime Minister said that Central and the state government has the policy as well as the will to work for the development of Jammu and Kashmir and that they never fall back in taking any decision.

He further said that there are various rivers in the Valley which can serve as a great source of hydroelectricity.

“This is that part of the country which can produce electricity not only for the state but for the other parts of the country as well. And keeping this in mind, we have been working on various projects since last four years,” Modi said.

However he said that for bringing change in the lives of people of Jammu and Kashmir, the all-round development of all the three parts of the states, Kashmir, Jammu and Ladakh is very essential.

Modi, who laid foundation for the Srinagar’s Ring road project, said that around 1200 crores will be spend on the construction of this 42 kilometre long road.

“This road will solve the problem of traffic jam in the city and will somewhat make your lives easy,” he said.

“The government is working for providing electricity in each and every house of the state. Under the Saubhagya Yojana, we are working to provide electricity in areas where there is no electricity yet. This is also a good coincident that we all have come together here during the holy month of Ramzaan. Today, I feel blessed to dedicate the Kishanganga Hydropower project to the nation. This project is ready to add to the developments of Jammu and Kashmir. I congratulate all of you on this occasion,” PM Modi said and added that 330 MW project will be helpful in reducing the problem of electricity to a large extent.

“After the floods in Jammu and Kashmir, I celebrated Diwali with the victims here. Besides this, I even got the opportunity to celebrate the festival of lights with the soldiers. And now, when the pious month of Ramzan is going on, I am amidst you people,”

He said that the people of Jammu and Kashmir know that how they have been deceived by forces inimical to peace. “We have appointed a special representative to speak to all elected people to find a way out of these difficult times, he said.

Complimenting the role of the security forces including the Jammu and Kashmir Police, the PM said that security forces have lent a helping hand to mitigate the sufferings of the people.

“I want to inform you that the J&K Police would soon complete the recruitment process of 5,000 youth,” he said.

The 14.2 kilometre long tunnel would be constructed at a cost of Rs 6809 crore and would be completed in seven years. On its completion, the tunnel would lessen the travel time on Srinagar-Kargil-Leh road from 3.30 hours to just 15 minutes.

Speaking on the occasion, Chief Minister, Mehbooba Mufti said the construction of the Zojila tunnel would cut down the psychological divide between people of different regions in the State by a great measure.