“We will never allow Jerusalem to be stolen by Israel". 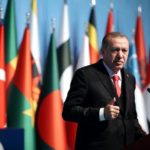 Reacting on the silence of United Nations over the events of Gaza where Israeli forces killed 60 Palestinian’s and wounded thousands; Turkish President Tayyip Erdogan on Wednesday said that the United Nations had “collapsed”, Express Tribune reported.

“Speaking at a dinner on the first day of the Muslim holy month of Ramadan, Erdogan said that the majority of the international community had failed to react to the events in Gaza, and warned that remaining silent would mean “opening a very dangerous door,” reports said.

He said that the silence of the United Nations is the indication that the United Nations has “ended” and has become “exhausted” and “collapsed”. “He threatened that if they did not stand against this brutality, the world will rapidly be dragged into chaos where thuggery prevails,” he said.

Earlier this week Erdogan has also called for an emergency meeting of the Organisation of Islamic Cooperation (OIC) in Istanbul on Friday.

“Even if the whole world shuts their eyes, we will not allow Israeli cruelty. We will continue to be with our Palestinian siblings not only with our hearts, but with all our resources,” reports said while quoting Erdogan.

“We will never allow Jerusalem to be stolen by Israel” he said.