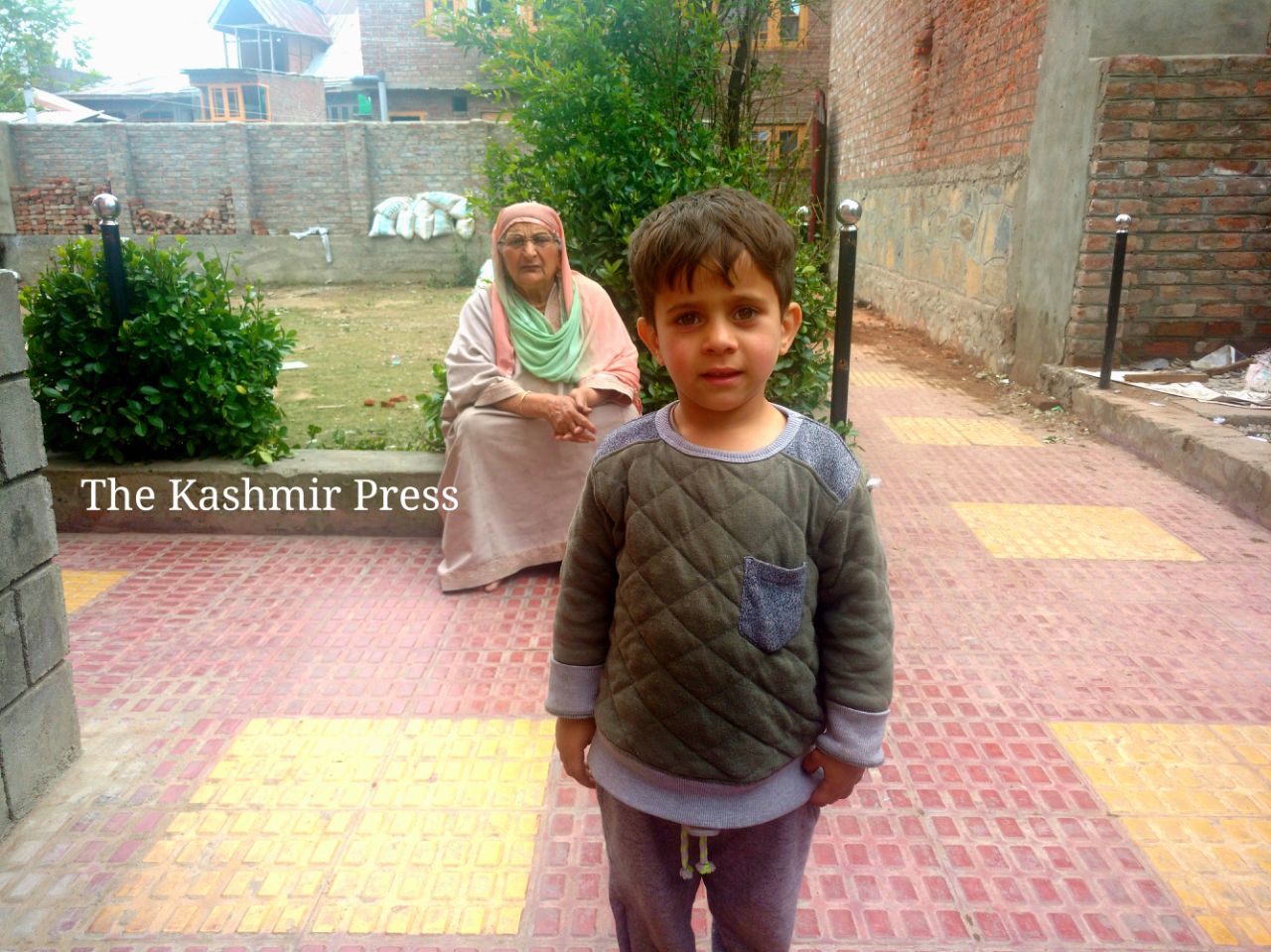 3 year old Muslim in the foreground while as her grandmother and mother of Hanief Koul at the background.  The little boy had a miraculous escape when bullets started whizzing around. Pictures- Umair Haqaani

Three year old boy, Muslim, volunteers as a ‘tour guide’ for the people who visit their house destroyed by the government forces during a recent gun battle at Chattabal.

The first thing Muslim does is that he takes visitors to a wooden window from where he was watching the men of Special Operations Groups (SOG) in large numbers n the courtyard of their house at around 7 a.m, May 05.

Suddenly the little boy heard the volley of bullets ringing in the air. He heard the sounds of whizzing bullets coming from all directions, aiming at the under construction house of his uncle.

“Gouel drai meiane kane ken” (The bullet whizzed past my ear), he said pointing towards his ear.

“Pate aye golie huper te, yepaer te” (Then bullets started hitting us and the new house from all sides).

“Ye bachewouv nove” (He (Muslim) has come to life again), Begum said. “Otherwise he would have been dead”

“One thing which i want to tell you is that my son Hanief has daughters to marry. He has only this house. Now he has nothing in his possession,” she lamented.

Muslim, a blue eyed kid has no idea as to what tragedy has befallen his family. He is too innocent to understand.

But, he remembers the word guel (bullet) which he mentions several times.

The under construction house of Mohammad Hanief Koul in Chattabal, where the gun battle took place, is in complete ruins.

Pieces of broken glass lie all over the ground, wooden widows are broken, and walls are peppered with bullets. The soot emanating from the burning wood in the house have blackened the white washed walls at several places. 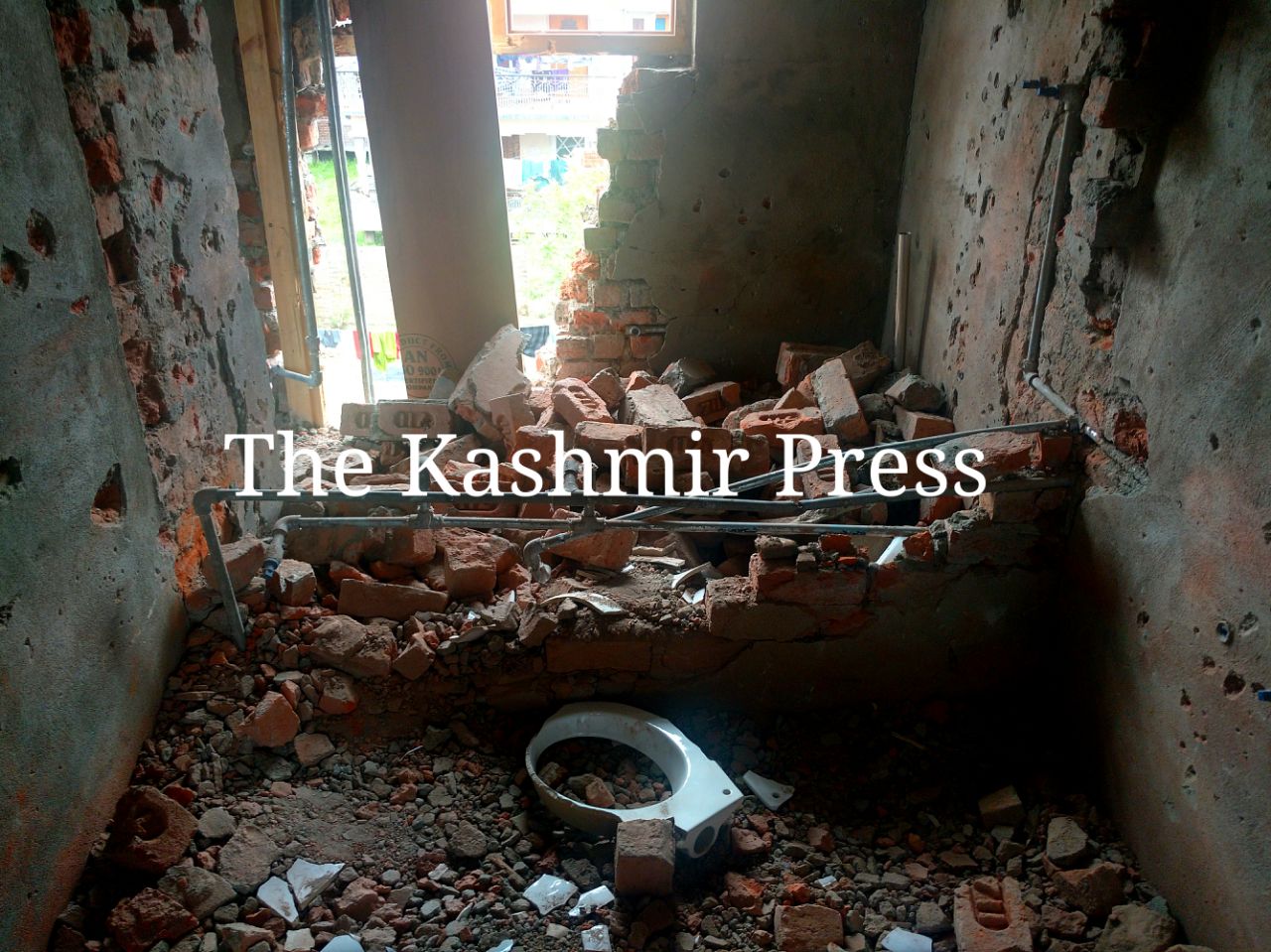 The house was blasted with Morter shells. The two militants were killed at this place. Blood stains are still visible on the walls. Picture- Umair Haqqani

“The entire spending of my life is gone,” Hanief told The Kashmir Press.

“It took just four hours to turn my house into a rubble. The house is completely destroyed ”.

“This destroyed house with its crumbling walls has become a structure of mourning and defiance,” he said.

Hanief said thousands of people visited his house place in Chattabal Srinagar to have a look.

“They expressed solidarity and the rage as well,” he said. “They were helpless”.

Three militants including two locals and a Pakistani were killed in gun-battle at chattabal last week.

Recounting the happenings, Hanief, who owns a small shop at Chattabal, said they were asleep when the SOG men knocked at the door of their house at around 3 am on May 05.

He said then they asked him to accompany to the new under constructed house situated right in front of the courtyard.

“Me and my brother were constructing this small two storey structure,” Hanief said.

“I left the new structure at around 12 am after white washing the walls. Till then nobody was there”.

On May 05, Hanief  said the SOG men appeared at around 3 a.m and asked the family to stay inside. He said that they searched each and every house in the surroundings as well.

“We are a big family of four brother who in two houses. We have ten kids in our house,” he added.

“They searched the new house. I was with them. Nobody was present there”.

The house owner said that the SOG men later took the position on vantage points in upper portions of the surrounding houses.

“The also took position in the attic of our house. We thought they might feel cold. We provided them with blankets,” Fayaz said.

A visibly worried lady from Hanief’s family while recounting the story said that when the cloud struck around 7 a.m that day, the SOG men gathered in the courtyard.

“We were watching everything,” the lady said. “They wanted to enter into the tin shed. But, at the same time, one of them shouted there is some ‘movement’ in our newly constructed house”.

She said the moment SOG man screamed the word “movement,” his other accomplices fled and jumped over the walls to take the position.

“One among them exploded a grenade. It hit our spleddour motorcycle and then the window caught fire,” the lady said.

“They started shouting and hurling grenades around. It was like a war in our house”.

The charred motorcycle parked against the old house wall remains testimony to the lady’s account.

“The fire doused miraculously otherwise our whole house would have caught fire,” she said.

“We started shouting around. Muslim got almost killed if his mother would not have lifted him from the window. We left the house afterwards”.

The lady said that militants did not opened fire till they left.

“One of the shell hit the front part of the house and left from the rear,” he said.

“Two militants were killed in first floor while one died in the ground floor”. 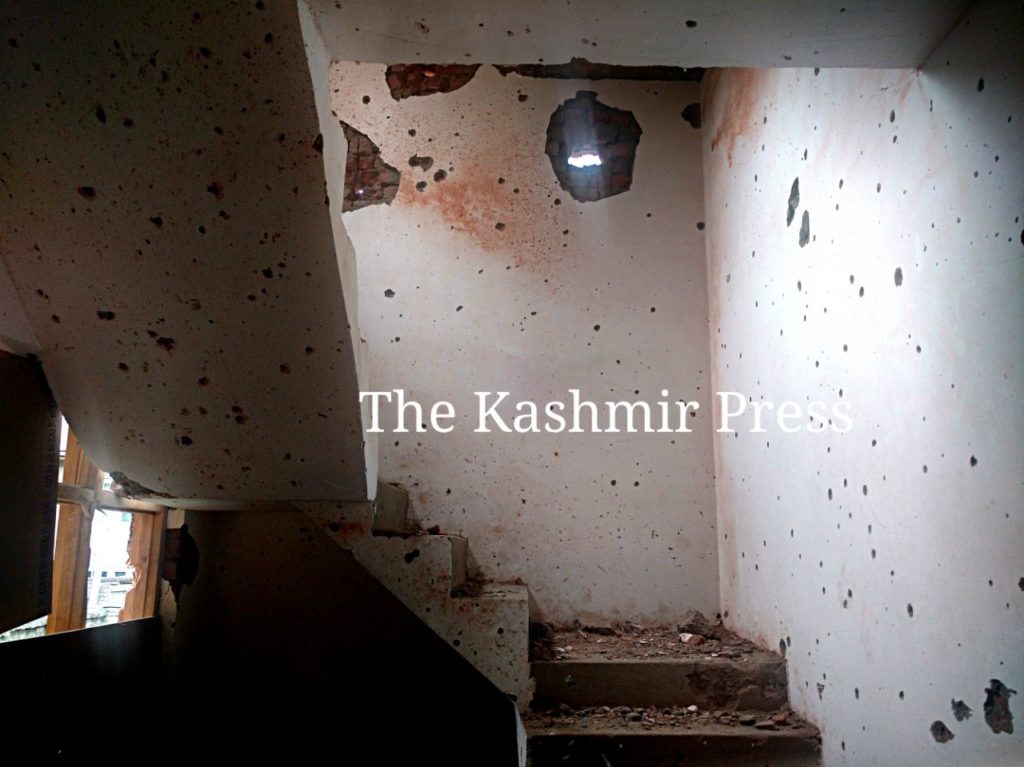 The walls peppered with the bullets and morter shells. Pic- Umair Haqqani

Inside the house, the bricks and the mortar was spread everywhere. There was smoke of burning explosives and wood. The walls have crumbled and the cracks have appeared in the cement slab covering the ceiling. The blood stains were visible on the white walls while as the intense firing has peppered the walls. Even the plastic water containers were not spared.

Hanief said he has worked hard to earn the money and spend on the education of his daughters.

“I have small savings which i put in this small house. It was almost ready,” he said.

“I have three daughters. I want to get them married. Now I have no idea what to do. I have nothing left in my pockets”.

Hanief reiterates that militants were not present in the house when he along with the SOG men entered the house. 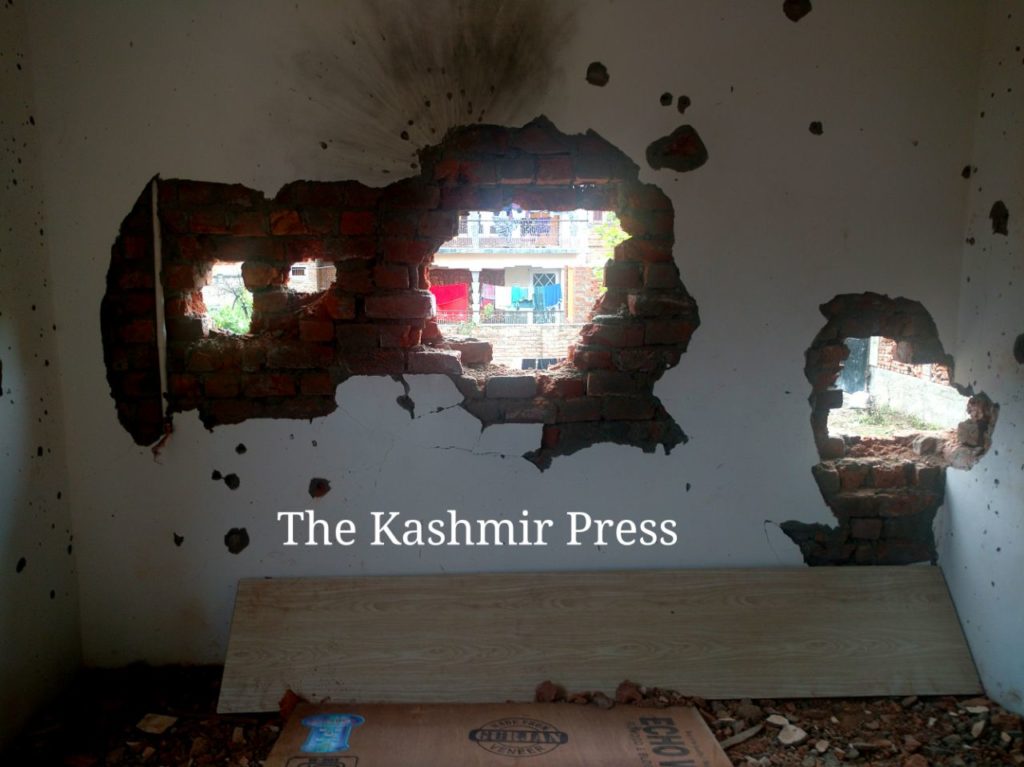 “There was nobody present in that house. Those policeman also knew. I have no idea where from they came and took refuge there,” Hanief said.

As such, Hanief and his brother approached the local police station to file a case and later seek compensation for damages.

“The policemen in the police station threatened me with the case. The blamed me for giving space to militants and said even i will be booked,” he said.

“I have no idea what to do. I have daughters to marry,” he said.

“Thousands of people came to our house, but they have forgotten the tragedy within a week. This is Kashmir’s story”.

Talking to the The Kashmir Press, Superintendent of Police, north of Srinagar, Sajjad Shah said that the family can approach to deputy commissioner’s office for seeking compensation provided they are not involved.

“But in this particular case, the compensation will depend upon the investigation. If investigation proves they are not guilty, they will be given the ex gratia relief”.

One Response to "Blasted house becomes symbol of mourning and defiance"