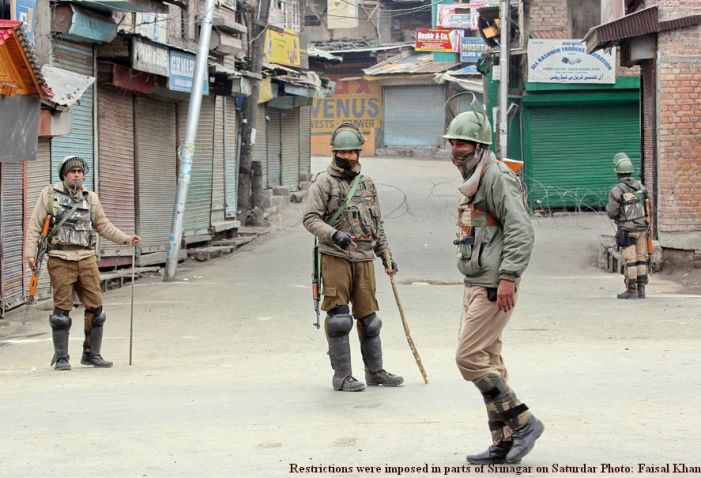 Srinagar, Apr 12: Kashmir on Thursday observed a complete shut down across Valley against the recent civilian killings in Khudwani village of south Kashmir’s Kulgam district.

In parts of Kashmir Valley, the curfew-like situation was imposed. All the commercial establishments were closed and traffic remained off the roads.

However, the very restricted vehicular movement was visible on uptown Srinagar.

Joint Resistance Leadership on Wednesday has called for the strike against the killings of four civilians in an encounter that raged between forces and militants in Khudwani area of South Kashmir’s Kulgam district.

The four civilians were identified as Sarjeel Sheikh of Khudwani, Bilal Ah Tantray of Frisal, Faisal Ilahi of Melhoora Shopian and Aijaz Ahmad Palla son of Muhammad Sikandar, a resident of Batpora Khudwani.

The government on Wednesday evening has decided to suspend the class work on Friday after students from different colleges came on roads to protest the killings of militants and civilians.

Meanwhile, Clashes were reported at many places across Kashmir. Sources informed Kashmir News Service, that clashes between the protesters and government forces erupted on Thursday in Drugmulla and Bumhama areas of Kupwara district.

All the educational and commercial establishments were closed and traffic remained off the roads. However, the very restricted vehicular movement was visible on uptown Srinagar.

Reports said that dozens of students of National Institute of Technology (NIT) Hazratbal, Srinagar on Thursday held a protest demonstration against the killings in south Kashmir.

An eyewitness said that scores of local students assembled in the premises of the institute and shouted anti-government and pro-freedom slogans to protest against the civilian killings.

Meanwhile, the students of Sher-e-Kashmir University of Agricultural Sciences and Technology (SKUAST) of North campus at Wadoora Sopore staged a protest demonstration against the Kulgam killings.

A top police official said that by and large, the situation across the valley remained peaceful. (KNS)