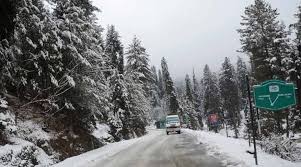 Poonch, Oct 18: Authorities on Tuesday closed Mughal road due to snowfall along Pir ki Gali (PKG), keeping in view safety of passengers on the thoroughfare which connects Shopian with twin districts of Poonch and Rajouri.

Confirming it, Dysp Traffic Rajouri-Poonch Range Aftab Bukhari said that the road will be opened after improvement in weather.

Meanwhile weatherman here said that light to moderate rain over plains and light snowfall over high reaches was most likely at scattered to fairly widespread places of Jammu and Kashmir on October 19 evening to morning of October 20. “There will be gradual improvement in weather from October 20th late afternoon,” a meteorological department official said here, adding, “There’s No forecast of any Major snowfall for next one week to 10 days in J&K and Ladakh.”