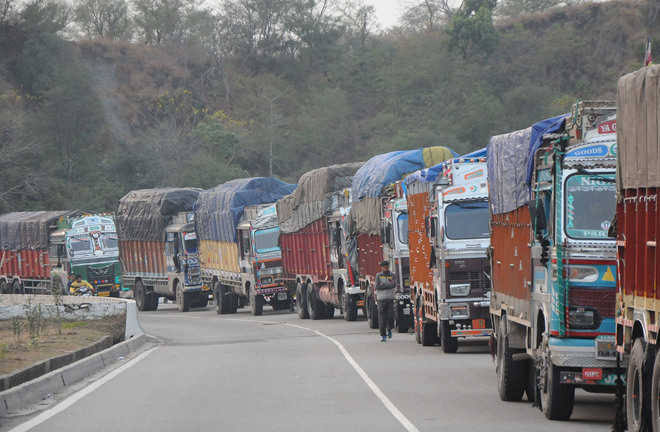 Anantnag, Oct 12: The authorities in South Kashmir’s Anantnag on Wednesday banned the movement of heavy goods vehicles on three inner routes, which lead to Qazigund tunnel.

In an order, district magistrate Anantnag , Dr Basharat Qayoom said that in view of the apple harvest season there has been a noticeable increase in the movement of heavy goods vehicles along all routes especially National Highway.

The order reads that it has been reported that in order to avoid rush on National Highway, the truck drivers adopt various inner routes to reach Qazigund tunnel area, which leads to traffic jamming due to which general public including patients suffer badly.

It added that in the previous year, a child lost his life, as he couldn’t get timely medical aid due to traffic Jamming on Anantnag-Dooru-Verinag (ADV road) road.

“In order to prevent recurrence of the unfortunate incident referred to above, and to address the issue of frequent traffic jamming in inner routes, it has become imperative to impose total ban on the movement of Jammu bound heavy goods vehicles on Mirbazar-Ashajipora Road, Anantnag Dooru-Verinag Road and Dalwach-Mehmoodabad routes,” it reads.

It added that it is hereby ordered that there shall be complete ban on movement of Jammu bound heavy goods vehicles on Mirbazar Ashajipora Road, Anantnag-Dooru-Verinag Road and Dalwach Mehmoodabad Road.

“Senior Superintendents of Police, Anantnag and Kulgam and Superintendent of Police Traffic Rural Kashmir and National Highway, shall ensure implementation of the order in letter and spirit,” it reads.