Government of India is committed to establish peace in Kashmir: MoS Finance 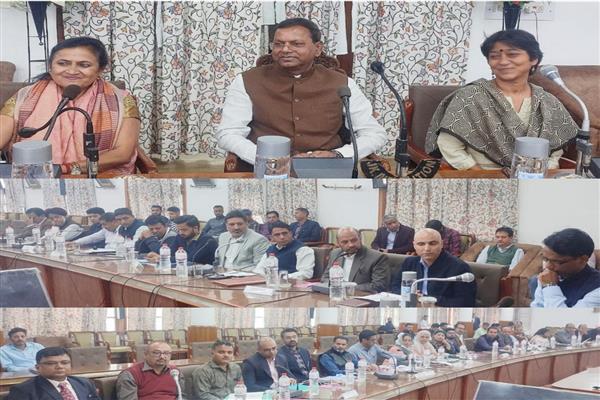 SRINAGAR, OCTOBER 12: Union Minister of State for Finance, Pankaj Chaudhary today said Prime Minister Narendra Modi has a special focus on Kashmir due to which peace is visible on the ground.

The MoS stated this while chairing a meeting with business and industry stakeholders to discuss various issues related to them here at Banquet Hall.

As part of the Public Outreach Programme, Chaudhary said that it is due to PM Modi’s vision that ministers are meeting all the stakeholders by visiting their doorsteps.

He said that the PM’s endeavor is that all the people in the government must visit people and stakeholders alike so that the ground situation should be obtained.

The minister said peace in Kashmir is a prerequisite to every other activity and all other things will happen automatically.

“And for all this, we need your support, our officers in administration are also there as the Government of India is committed to establish peace in Kashmir and it is moving in the right direction in this regard,” he told heads of trade associations.

Earlier, several heads and representatives of business and industry from Kashmir put forth their issues and grievances before the minister who gave a patient hearing to them.

The trade association representatives talked about downgraded accounts of business units, the revival of businesses, the inclusion of existing business units in New Industrial Policy, compensation for business losses, subsidies, etc. Besides, taxation matters, and interest subvention among other issues were also put forth before the minister.

Responding to the businesses’ representatives, the minister assured that all the genuine issues and grievances flagged before him would be definitely taken up with the concerned departments for redressal.

Earlier, Commissioner, State Taxes Department, Dr. Rashmi Singh briefed the minister about the latest journey of the department with respect to the Good Governance practices in the department.

She said that the department is vigorously facilitating a conducive environment for investment and working with utmost dedication and sincerity to achieve the dream of PM of prosperous and peaceful Jammu and Kashmir.

Among others, the meeting was attended by the officers of State Taxes Department, Income Tax Department, Industries & Commerce, Finance Department, Handicrafts & Handloom, J&K Handloom Development Corporation and other concerned.