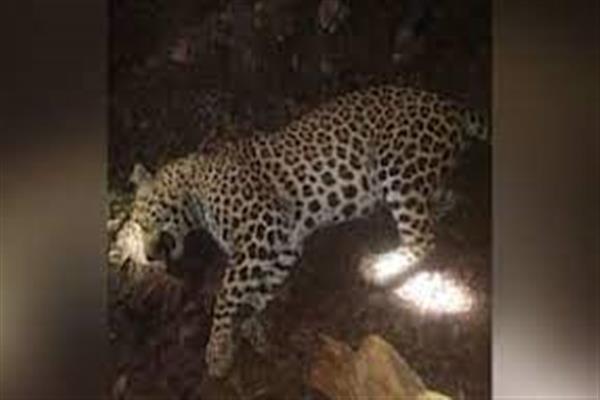 Baramulla, Oct 9: After giving sleepless nights to locals and keeping wild life teams on toes for more than a fortnight, “man-eater” leopard was on Sunday “hunted down” in Uri area of north Kashmir’s Baramulla district.

Wildlife team and police eliminated the man-eater wildlife beast after it attacked a woman namely Dilshada Begum (30) wife of Farid Ahmad of Latchipora.

While woman was removed to GMC Baramulla for medical treatment, teams of wildlife and police, camping in the area from last more than a week achieved success in eliminating the beast.

Officials of the wildlife department said that the movement pattern of the beast were highly dynamic and had been closely watched.

The officials said that after the killing of two minors, several teams were deputed on several spots in Uri to locate the animal.

On 16 September at 7.00 PM, a girl child namely Munzia Beigh daughter of Imran of Jabadar Lachipora Boniyar (Uri) was lifted and killed by a leopard. Her body was recovered from a nearby forest area late in the night on the same day.

Subsequently on September 22, at about 7.30 PM another child namely Ali Hussain son of Abbas Hussain of Dani Cholan Boniyar (Uri) was lifted and killed by the leopard and subsequently his body was retrieved after several hours search from the forest area. gns