‘8000 fruit laden trucks stranded waiting for their turn on NH at Qazigund; have decided to keep all mandis shut for two days to press for demand’ 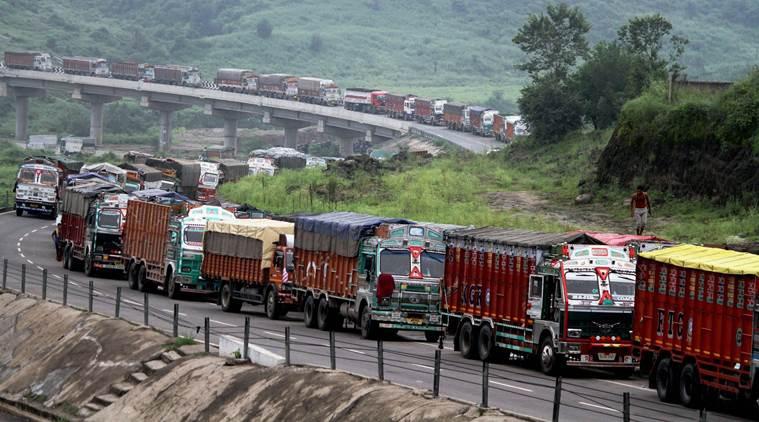 Srinagar, Sep 24: The fruit growers across Kashmir Saturday said that they continue to face losses alleging that the government has failed to ensure hassle free movement of apple laden trucks on national highway.

Several fruit growers and representative of several associations said that despite government orders, authorities have failed to implement it on ground.

Nisar Ahmad, a fruit grower from South Kashmir said that directions passed by the government have been thrown to wind as government has failed to implementing its own order on ground. “Fruit laden trucks are being halted at Qazigund for around week after that they get turn to move towards Jammu,” he said.

He said that this industry is crumbling due to low rates and other challenges and if government won’t ensure the hassle free movement of the apple laden trucks, this industry will definitely collapse.”

Muhammad Abbas, another grower said that this industry is facing several challenges at a time and government must at least ensure hassle movement of the apple-laden vehicles so that produce will reach markets on time and it will fetch a good rate.

He said that despite recent government vehicles get their turn after 4-5 days to move towards Jammu and when produce reaches to market very late, it didn’t gets the rate that it would get if it reaches market on time.

He said that it is matter of livelihood of around 60-70 percent of population of Kashmir and government must take it seriously.

He said that around 8,000 fruit laden trucks are waiting for their turn to move towards Jammu and it is not possible that they will cross the road in just three hours.

Ahmed said that representatives of all fruit growers Association protest in Srinagar today but despite protests nothing happened.

“In protest, we have decided to shut all our Mandi’s for two days (tomorrow and day after tomorrow) so that government can take this issue seriously and implement orders on ground,” he said.

Notably on Monday last, the IGP Traffic directed all SSPs of traffic including SSP National Highway to take immediate necessary measures so that fruit laden trucks are provided a smooth passage and are not stranded. “Besides, extra time may be given to down convoy to ensure clearance of stranded fruit laden vehicles and it was assured no vehicle would be allowed for up traffic on down HMV days to ensure hassle free movement.”.kno