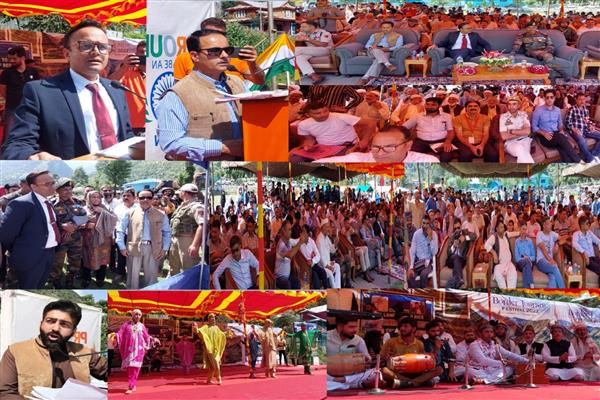 The festival witnessed participation of large number of local and non local tourists with much fanfare
Director Tourism, G.N Itoo was the chief guest on the occasion.

The attraction of the festival was presentation of various multi lingual cultural and musical items by different renowned bands, groups and children who received huge applause from the audience. The Phari/ Gojri culture programmes, Talwaar Baazi by sons of soil, Rouf Dance , Students Lazium, Tag of War and various other cultural programmes by different agencies.

Folk tribal songs and Talwaar Baazi left the audience spellbound. The other cultural items were also an eye-catching for the audience.

Addressing the gathering, Director Tourism said that the aim of organising the Border Tourism Festival at historical Teetwal was to promote the area as a tourist destination besides, providing a platform to local artists to showcase their talent.

He said such festivals shall attract more tourists and help in upliftment of socio-economic status of people of district Kupwara, especially living in farflung Karnah sub division.

G.N Itoo said the aim of the Border Tourism festival was fulfilled by witnessing the enthusiastic and huge participation of people.

The Director expressed his gratitude towards the Lieutenant Governor for creating the border tourism facilities in the district. He said it is because of his efforts, the Teetwal Festival witnessed enthusiastic and huge participation of people.

The Director further said that the border tourism has a potential to change socio-economic condition of the people.
The Director Tourism urged the people to get registered for homestays as tourists prefer home stays to enjoy rich cultural heritage. He urged people to spare surplus rooms for tourists and earn livelihood.

Speaking on the occasion, the DC Kupwara appreciated the efforts for tourism promotion across the district. He said promotion of border tourism will help in generating more income and employment avenues for youth, here.

The DC said that nature has bestowed Kupwara district with plenty of attractive beauty and the Administration is working tirelessly for development of various tourist destination including Bungus, Lolab besides, Border Tourism and Trekking in Karnah sub division. He said apart from tourism industry, Red Rice production is also increasing in the Karnah sub division and the administration is committed to augment its potential.