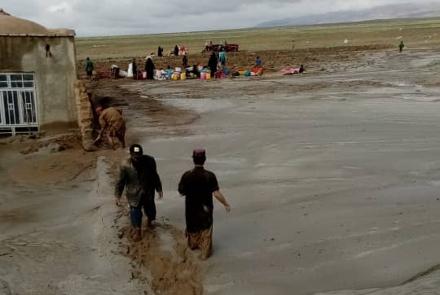 Kabul: At least 20 people were killed and more than 30 others were injured in floods that hit the Khoshi district of Logar province, Tolo news reported

The provincial officials said that thousands of acres of agricultural land and hundreds of residences have been destroyed.

According to the officials, four people have disappeared.

“Due to these floods, 20 people have been killed and 32 others wounded. Four people have disappeared and around 3,000 residences were destroyed,” Provincial Governor Mawlawi Enayatullah Shoja said.

The flood happened at midnight while the residents were sleeping. Dozens of families were displaced from the area. The residents suffered heavy financial losses in the flood.

“Around 3:00 yesterday evening, the residents witnessed a flood. The floods destroyed many residences,” said Tali Mohammad, a flood affected person.

“Our house is completely destroyed. We call on the in charges to provide us with assistance,” said Nabiullah a flood affected person.

The provincial department of disaster management said aid teams are in the area to provide the people with necessary assistance.

“The situation is an emergency. The women and children are stranded and efforts are underway to rescue the people,” said Mawlawi Abdullah Mufakir, head of the provincial department of disaster management. (Tolo news)