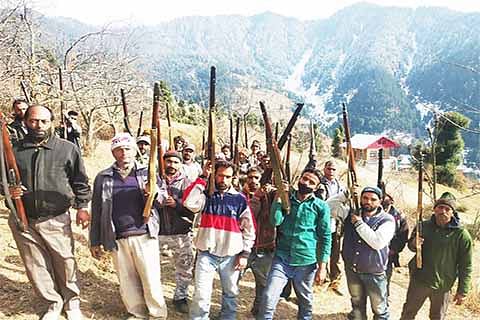 Srinagar, Aug 15: The Jammu & Kashmir Government has revised the Village Defence Committee scheme unveiled by it in 1995 for self-protection of the identified vulnerable villages in Jammu province.

In an order, the Jammu & Kashmir Home department said that a need was felt to revise the existing scheme with a view to prevent the incidents of militancy acts inspired and supported from across the border and to boost the security grid in the Union territory.

The aim of the Village Defence Guards Scheme (VDGs) is to organize a small group of volunteer armed civilians in the identified villages along the borders as well as in-depth areas of the Jammu division, with a view to instill sense of self protection and ensure the safety and security of such villages, infrastructural installations in and around them and to check the trans-border movement.

As per guidelines of the revised scheme, the areas/villages, where the earlier scheme was in operational be considered as “more vulnerable areas” for the purpose and the arrangements made pursuant to the earlier scheme be governed by the new scheme. “Apart from these areas/villages, any other area/village, which may be considered as “more vulnerable area” by the law enforcement agencies, necessitating application of the scheme to such other area/village, the government in the Home Department shall by an order declare such area/village as a “more vulnerable area” for the purpose of the instant scheme,” the order states.

As per the order, a group of armed civilians belonging to the “more vulnerable areas”, not more than 15 in number in each group, shall be designated as “Village Defence Guards (VDGs).

Each group will be called the “village defence group” and shall be headed by a retired officer of the Army/CPMF/J&K Police.

“The members of each group shall work on a voluntary basis and the selection shall be made carefully by the district administration, from amongst the ex-servicemen and ex-policemen of the village and able bodied young men, who have proficiency in the handling of arms/ammunition and are prepared to contribute towards the welfare of the community and security of the village,” the order further states.

The Home department said that each Village Defence Group shall function under the supervision and direction of SP/SSP of the concerned district.

The Village Chowkidar and Lumberdar of the “more vulnerable areas” shall be instructed to assist the Village Defence Groups in carrying out their duties, the order states.