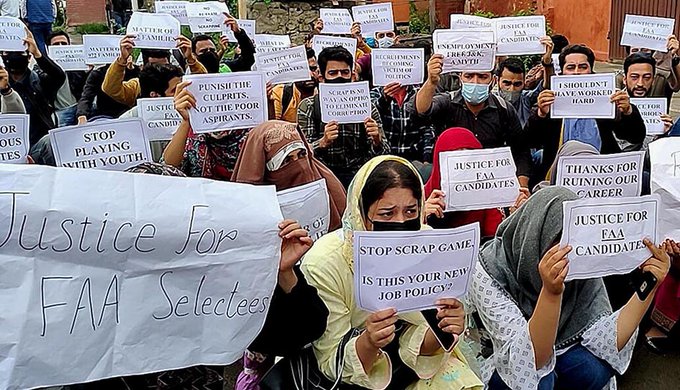 Srinagar, Jul 16: Something fishy is happening inside, said the Finance Accounts Assistant (FAA), who are protesting for the last three consecutive days at Srinagar’s Press enclave as they blame the authorities for shielding the culprits involved in the scam.

“From the last three years, we have been preparing for the exams and finally the examination was held and the results of which were declared on April 22nd,”Nelofar, one of the protesting aspirants, said.

She said after results, the final selection got delayed following which they approached the concerned authorities where they came to know that some “scam” had taken place and the recruitment will be “scrapped”.

“I don’t understand the reason behind our hard work. Is this because of our hard work that we are forced to hit the streets? We don’t deserve it,” Nelofar said, adding that if a scam has taken place then the government should identify those who are involved in it, but not at the cost of the career of aspirants.

“One fails to understand why the recruitment will be scrapped. Are the government agencies such incompetent that they would not be able to identify the black sheep in the recruiting agency? It seems by scrapping the recruitment process, the authorities are shielding the culprits,” she said.

“I have worked hard for the examination, but unfortunately the promises over transparency by the government have fallen flat,” she said.

Another protester, Rameez Ahmad, said that the whole process seemed to be preplanned and a cruel joke with the aspirants. “We have sacrificed everything for this job and kept working hard to get the selection. However, our career is being ruined by scraping the recruitment process,” he said.

However, he added that the aspirants are ready to cooperate with the government, but only those who are involved in the scam should be kept at bay and those who deserve should not be pushed to the wall.

Pertinently, for the third straight day, the aspirants of Finance Accounts Assistant (FAA) continue to press for their demands amid speculations that the job they have applied for will be scrapped.

The aspirants, including boys and girls, held a sit-in at Srinagar’s press enclave, carrying placards reading slogans in favour of their demands. Nearly 100 aspirants out of total 927 have been staging protest at press enclave since Thursday after they came to know that the job they have applied for will be scrapped. kno