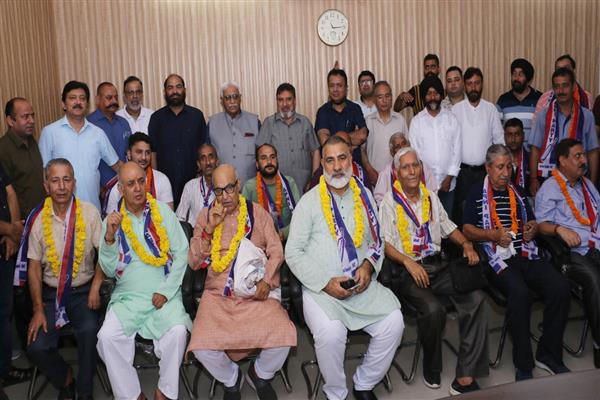 While welcoming them into the Party, Altaf Bukhari said that the joining in Apni Party was a big success for the Party and it would help the Party to expand its roots in the society for the upliftment of the people of Jammu and Kashmir.

Lauding the joining, he said that “The Kashmiri Pandit community is part and parcel of Kashmir and the circumstances under which they left Kashmir valley is history now.”

He also admitted that the exodus of the KP’s was a tragedy which had torn the fabric of social harmony which needed to be restored.”

“Kashmiri Pandits are intellectuals and they have an important role to play in the society. Without their participation, Kashmiri society is incomplete and hence, the Apni Party is committed to continue its struggle for the return and rehabilitation of Kashmiri Pandits,” he said.

He assured that the issues of the Kashmiri Pandits would be highlighted and resolved on priority basis by the Apni Party. “The relation between Kashmiri Pandits and Kashmiri Muslims will be strengthened with the joining of prominent people, social and political activists,” he hoped.

He expressed happiness at the support shown by the KP’s whose joining in large numbers was a very encouraging endorsement of the policies of the Party.

Earlier, Altaf Bukhari asked for two minutes silence to be observed for the dastardly killing of Rahul Bhat Rajni Bala and Vijay Kumar. He also expressed deep concern over the civilian killings.

He said that “There is a need for bridging the gulf between the Kashmiri Muslims and Kashmiri Pandits and that he would personally help in this task to restore the confidence of the people from both the communities.”

In his address, Apni Party State General Secretary, Vijay Bakaya while welcoming the KP’s, expressed happiness that they had taken the right decision.

He was confident that in future more KP’s would join the Party in large numbers and contribute to bringing it to power as a strong forward looking, development oriented and secular and pragmatic model of governance.

Following the joining, Somnath Dhar – on behalf of those joined Apni Party – said that they had come to the conclusion that the Apni Party, under the leadership of Altaf Bukari, had emerged in the last two years as the only political Party in the UT which was trying to bring the people out of a state of uncertainty, created by empty promises and false dreams which had been propagated for the past more than 70 years by political parties which had governed the State, now UT, from time to time.

He also said that Altaf Bukhari’s was today the only strong, convincing pragmatic voice which raised the basic issues confronting the people in the absence of a political government. He further said that the Apni Party had made a strong plea for the return of KP’s to Kashmir and Altaf Bukhari had promised to lead the way.

Dhar felt that the Apni Party was capable of taking care of the aspirations of the displaced KP’s and that this belief had made them decide to join it.