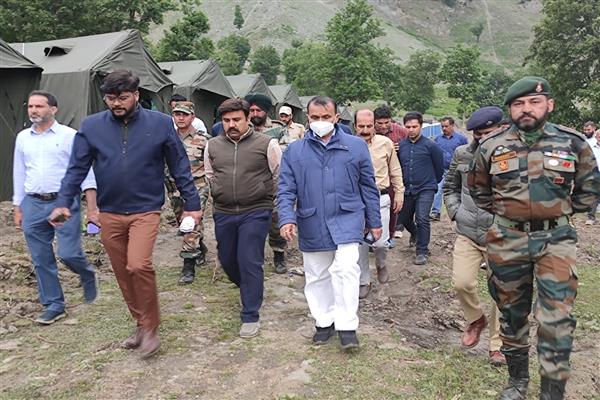 The Principal Secretary, who is also the CEO of Amarnathji Shrine Board directed the concerned departments to work in close coordination for finalizing the necessary arrangements well before the commencement of the Yatra so that pilgrims may not face any inconvenience.

He impressed upon the departments to ensure foolproof arrangements for power supply, medical facilities, safe drinking water, sanitation, provision of toilets and bathrooms, sanitation facilities, parking, lodging and langer facilities, traffic and security arrangements etc. and directed them to ensure the tasks assigned to them are completed within the set timeline.

While inspecting the arrangements and facilities being put in place, the Principal Secretary directed the concerned officers to ensure that appropriate number of washrooms, dustbins, public utilities are put in place at each designated location to ensure the base camp and other sites are made comfortable, clean and hygienic for the pilgrims.

Meanwhile, the Principal Secretary inspected the facilities at Base Camp Hospital Baltal and inspected various units like X-RAY and USG unit, dispensary, laboratory, emergency and OPD ward and directed the CMO to ensure sufficient essential medicines, oxygen cylinders and other emergency equipments are made available in the hospital. He also took stock of 70 bedded DRDO hospital coming up at Baltal.

The Principal Secretary also visited the site of Tent City which is being established at Baltal with 800 tent capacity, and was informed that tents will be outsourced to the locals who shall make bedding arrangements themselves.

Speaking on the occasion, the Principal Secretary reiterated that the LG led administration is committed to ensure the yatris on pilgrimage to the holy cave experience a comfortable and pleasant environment, and said that the locals who provide various services during Yatra like ponies, logistics and other services are also fully prepared to provide all support for the successful conduct of the yatra.

Earlier, the Principal Secretary along with the Deputy Commissioner took an aerial survey of Yatra Track to inspect the progress of development works carried by various departments, including development and illumination of the track, establishment of shelter sheds, health facilities, mobile connectivity and overall condition of the track, and was satisfied with the pace of progress and complimented the district administration for its efforts in completing most of the works on time.