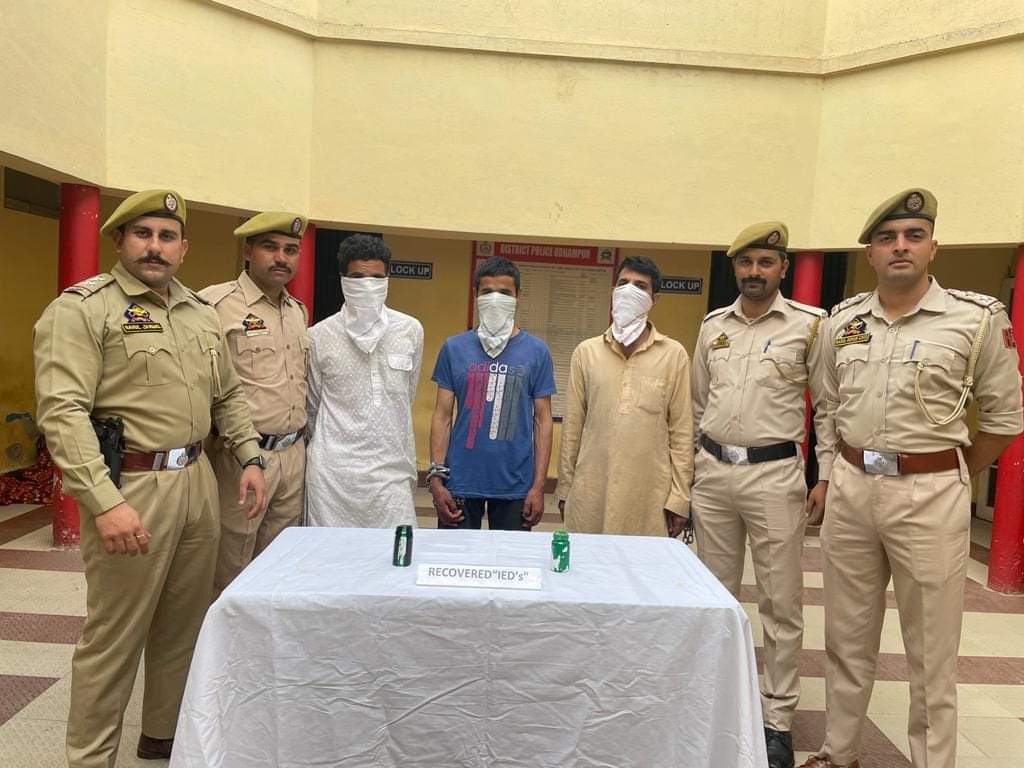 Jammu, Jun 04: Police has arrested three militants of Lashkar-e-Toiba for planting low-intensity IED explosion outside a court complex in Udhampur district in March that left one person dead killed and 17 were injured, officials said on Saturday.

ADGP said that after the blast a case was registered and investigation of the case was entrusted to DySP Hqrs. Udhampur Sahil Mahajan.

“During the investigation a number of suspects were questioned and finally one suspect Mohd. Ramzan Sohil son of Mohd. Ishaq Sohil resident of Halla Bohar Dhar, Neel Banihal  Ramban was zeroed in,” the ADGP said, adding that the accused during questioning confessed that he had placed a sticky bomb IED in Slathia Chowk Udhampur on March 9.

“The accused confessed that he did recce on March 1 on the directions of his Pakistani handler Mohd. Amin alais Khubaib S/O Dawood Butt R/O Kathawa Thathri, Doda (at present PoK) and planted an IED on March 9,” the ADGP said.

The ADGP said that the accused was in touch with a Pakistani handler via social media.

“The father of Ramzan Sohil, Mohd. Ishaq Sohil was a trained terrorist of LeT and was neutralized in the year 2003, the Pakistani handlers used this pitch to motivate him for planting the bomb,” he said.

“Ramzan was in contact with Pakistani handler Khubaib through social media. He was instructed to fix one Sticky Bomb IED at Slathia Chowk and other to be placed at some safer place for future use,” he said. “On his disclosure another sticky bomb IED has been recovered from same place.”

The ADGP said that Ramzan had received an amount of Rs 30000/- in his J&K bank account on March 23 for the blast he carried out at Udhampur as promised by the handler Khubaib of LeT.

“The said amount was deposited in the account of Ramzan by Khurshed Ahmed resident of Motla Dessa, Doda on the directions of LeT group handler Khubaib. Khurshed was also arrested in the said case,” ADGP said.

He said that Khurshed’s brother-in-law namely Bilal Ahmed Bhat is a trained militant of LeT group operating in Pakistan for LeT since 2002. Khurshed is handling the monetary channel of Khubaib, the police officer said.

The AGDP further said that the third arrest was of Nisar Ahmed Khan S/O Late Ghulam Mohd. Khan R/O Dhani Bhaderwah, who was a trained militant and remain active in the belt of Doda district during the year 2001 to 2006 with LeT.

“Nisar Ahmed Khan handled the transportation of IEDs on the directions of Khubaib. He picked the Sticky bomb IEDs twice, one in the month of December 2021 and other in the month of January 2022 from Belicharana, Jammu, the location and the picture of the same was sent to him on his suspicious application on internet,” the ADGP Singh said.

“On his disclosure, one Sticky Bomb IED was recovered from Kursari village in forest area of Bhaderwah, Doda District,” Singh said.

The ADGP further said that investigation of the said case is going on and more arrests are expected in near future.

The ADGP further said that from new pattern and recoveries near border, it seems that the “sticky bomb threat is real and people must stay cautious to when venture out.”

“In past sticky bombs were recovered. The case happened in Rajouri-Poonch, Udhampur, and a suspicious blast occurred in Vaishno Devi pilgrim’s bus, inquiry and forensic report of which are still pending, so this is a real threat and we people need to remain cautious,” he said.kno