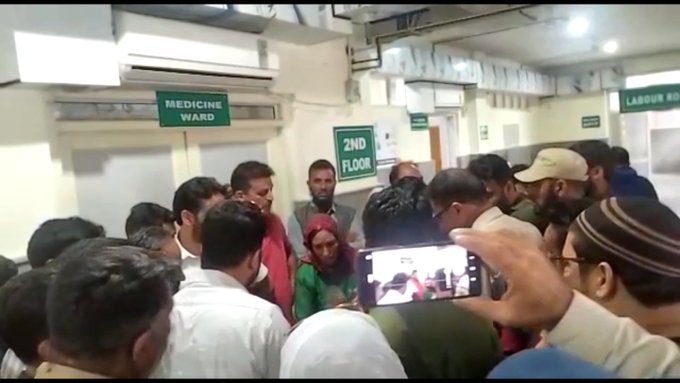 Jammu, May 23: A newborn baby was on Monday declared dead at Sub District Hospital Banihal but was later found to be alive while being taken for burial by family members.

The authorities have suspended two employees following a protest by the family who were joined by locals outside the SDH Banihal.

As per the protesters, wife of Basharat Ahmed of Bankoot gave birth to a baby at the hospital. Subsequently, they said, the family was told that she has given birth to a stillborn. The family later took the baby for the burial. A family member, however, noticed the baby moving and alerted others. Immediately the baby was rushed to the hospital again wherefrom he was referred to Srinagar hospital for specialized treatment.

Meanwhile a police party headed by SHO Banihal Muneer Khan reached the protest spot and pacified the protesters with the assurance that action as warranted under the law will be taken against whosoever found culpable for the dereliction.

When contacted, Deputy Commissioner Ramban Masrat-ul-Islam said that the concerned BMO has been placed under suspension two employees, pending an inquiry against them.

“Pending inquiry into the alleged death of a new born baby, Sumina begum, junior Staff Nurse and Hajara begum sweeper working in the gynae section of the SDH Banihal are placed under suspension with immediate effect,” reads the BMO’s order.