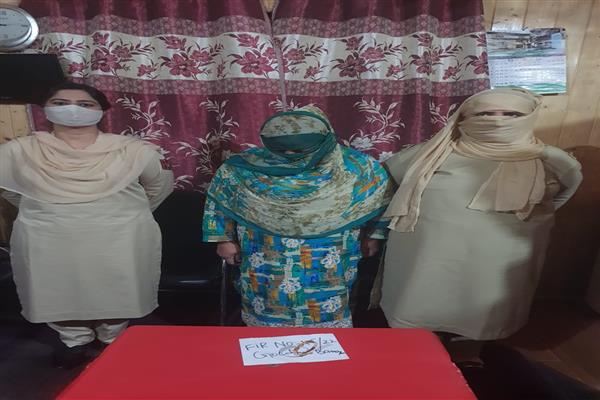 Srinagar, May 11: A woman thief was arrested in Srinagar for stealing a gold bangle from a girl near Bakshi Stadium, while stolen bangle was also recovered.

According to a statement,on  06/05/2022 police station Shergarhi received a complaint from Jana Begum wife of Muhammad Sultan Sheikh of Wathoora area of Chadoora to the effect that on the said date she along with her daughter travelled to Srinagar for treatment.

The statement reads that while on way to the doctor, near Bakshi Stadium a gold bangle that she was wearing was stolen probably by a woman.

“In this context FIR No. 45/2022 U/S 379 IPC was registered and investigation set into motion. After strenuous efforts a woman (name withheld) was apprehended by Police station Shergarhi, on questioning she admitted that she had stolen the gold bangle.”

It added that on her instance the bangle was recovered from Chadoora and the arrest of the lady was affected and further investigation is going on.