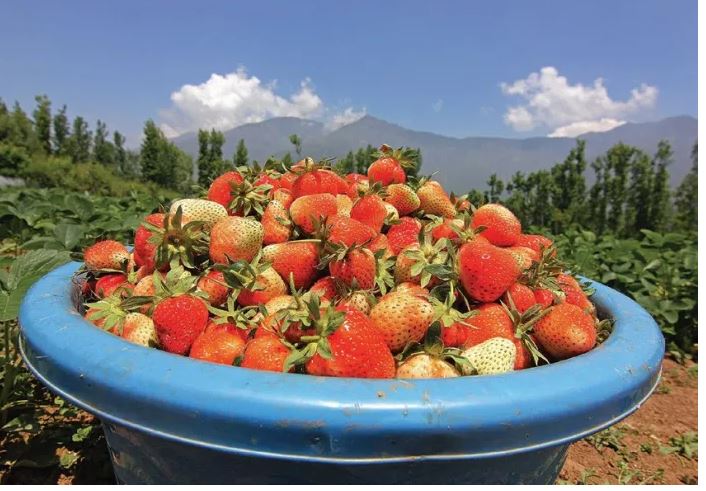 Srinagar, May 09: The rise in temperature and deficient rainfall this year has not affected the electricity and water supply only, but has affected the strawberry owners in Kashmir as well with growers saying that they have suffered huge losses due to the none availability of bore-wells.

Scores of strawberry owners narrated their ordeal and sufferings this year due to the abrupt rise in temperature and also the deficient rainfall.

Manzoor Ahmad Dar, who is a strawberry grower from Gasoo area of Hazratbal in Srinagar outskirts said that the production this year is less as most of the fruit got damaged due to the abrupt rise in temperature in March month and also deficient rainfall.

“Unlike previous two years when Covid-19 was at peak, the growers were expecting a good season this year, but the temperature and deficient rainfall has caused extensive damage to the fruit,” Dar, who is associated with strawberry business from last eight years.

He also rued the lack of support from the government, saying that no assistance is being provided to them even the demands of bore-wells have not been fulfilled.

Shabir Ahmad, another grower, who also hails from Gasoo locality said that most of the families here are dependent on strawberry trade only here.

“The market this year compared to previous years was good, but unfortunately the production is less. The markets were closed due to Covid-19 and thus simultaneously the rate got declined,” Ahmad said.

He further added that it is imperative to have moderate temperature for the fruit, but as the temperature soared abruptly in March, the growth of fruit got affected, thus giving losses to the growers.

However, Ahmad said that despite most of the villagers here are associated with this trade only, the people have been deprived of the irrigation facilities. “We have been demanding borewells for the villages here from last five years, but nothing has happened so far. Even this year too, we wrote a letter to the concerned authorities, but all in vein,” he said.

Ahmad said that the borewells could help them in ensuring better fruit production and appealed the government to assist them in this regard so that they could heave a sigh of relief.

Pertinently, the temperature in Kashmir recorded an abrupt rise since March while the Valley also recorded a deficit of nearly 96 per cent rainfall, thus affecting the water and electricity supply, besides leaving the fruit growers to lurch at large. kno