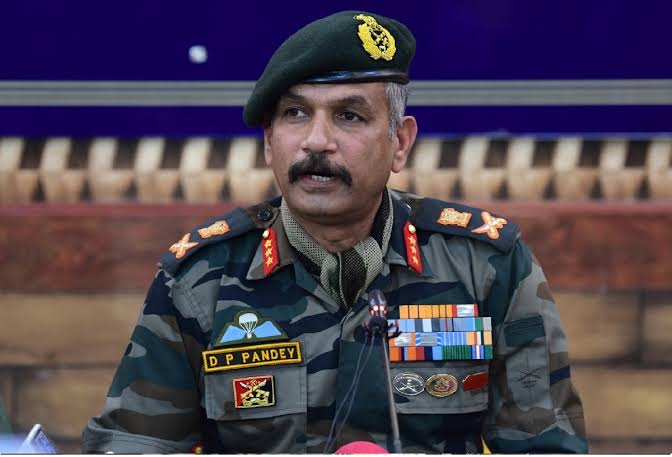 Srinagar, May 02: General officer Commanding (GoC) of Srinagar-based army’s 15 Corps Lieutenant General  D P Pandey said that since the number of local militants has started going down significantly, foreign militants are feeling compelled to come out of their hideouts and that’s why forces are able to establish contacts with them.

“The foreign militants, majority of them, were on the quiet. They were putting local youth on the forefront in carrying out operations against security forces. As the number of local militants has gone significantly down, the foreigners are now feeling compelled to come out of their hideouts and that’s why they are getting exposed and we are able to establish contacts with them of late,” the outgoing GoC told reporters on the side-lines of a function at 15 Corps headquarters in Srinagar.

Replying to a query, valid Ahdaar cards were found from two slain foreigners killed in Srinagar recently, he said that this indeed was a challenge. “If a person (foreign militant) comes out during a live encounter having a valid Ahdaar card, it is difficult to challenge him. Gradually, we will overcome this challenge,” the army officer, who is set to join new posting soon, said.

About infiltration, the GoC Pandey said that this year so far, only one infiltration attempt was made which was foiled by the alert troops. “Though some mild attempts were made but no major infiltration was reported from across along the LoC this year,” he said and credited the robust counter-infiltration grid put in place by the army on the LoC.

To a query that there are reports that militants are again using satellite phones and nigh vision devices being used by US forces and other forces across the globe, the GoC said that it was true that some devices that are being used in other parts of the world were used by militants and recovered here too. “It is not a big challenge and we have been able to overcome it effectively,” GoC Pandey said.

He said that the event titled “Josh Talks” was aimed to highlight the talent of Kashmiri youth who have a great stories to tell the world. “These stories need to be told to the world as they are a source of inspiration for the people. The process will continue,” he said. kno