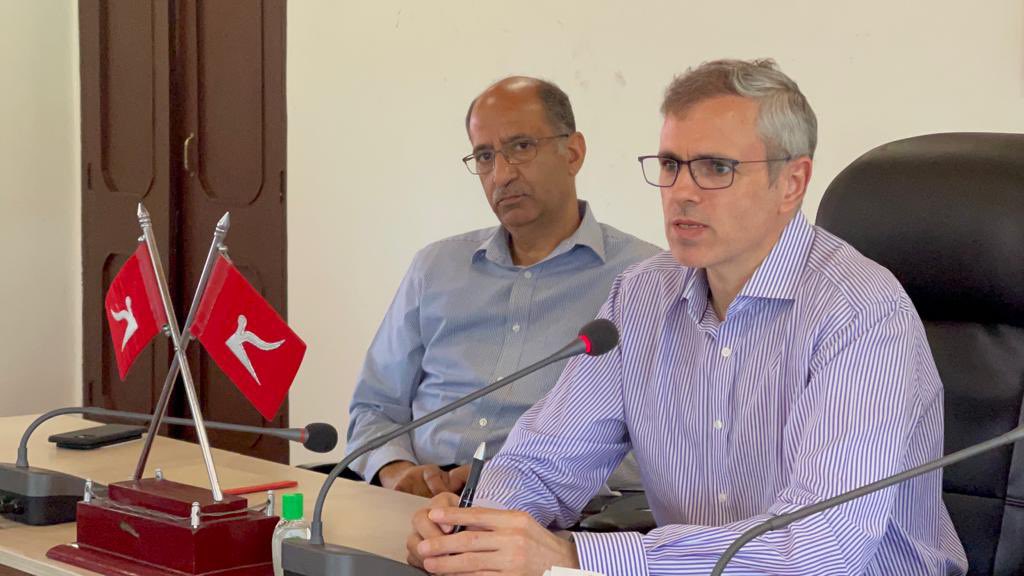 Srinagar, Apr 27 : National Conference (NC) vice-president Omar Abdullah Wednesday said that he would suggest that the PAGD should contest the upcoming Assembly polls in Jammu and Kashmir jointly to keep away BJP and it’s A&B teams.

“This is my personal opinion. If someone asks me, I would suggest PAGD should go together in the polls ahead to keep BJP and it’s A & B teams away,” Omar told reporters as quoted by news agency kno on the sidelines of youth convention of National Conference at Party headquarters, Nawa-e-Subh here.

Omar said that though it was his personal opinion, final decision lies with the PAGD itself.

Earlier Abdullah said that it is by the reason of unconstitutional and undemocratic decisions taken on 5th of August 2019 that the youth of J&K are struggling with despondency and despair.

During the course of the meet, the YNC functionaries presented a grim picture of the youth issues in their respective districts.

The functionaries also gave an estimation of the prevailing political situation in their areas to the party VP.

Taking a jibe on those who are misleading the youth of Jammu and Kashmir about NC and its pioneering and historical role in the socio political and economic emancipation of the people of J&K, Ladakh he said, “Our youth are being told that NC has made no contributions for the emancipation and upliftment of people in J&K. What changed on August, 5 , 2019 were the hard-earned protectionist measures and laws for the preservation and protection of JK’s historical individuality  and unique constitutional status. What changed on that day was the vision that made the people of J&K, irrespective of their caste and creed, the masters of their own destiny,” he said.

He said that if the youth of Jammu and Kashmir are mired with despondency, it was as a reason of the August 05, 2019 decisions. “Much was claimed while marketing the decisions of August, 5 2019. What happened to those promises? Where are those jobs? Where is that much touted development?” he asked.

Alluding to the pervasive insecurity among J&K youth, he said that the scholars and researchers are being held for their decade old dissertations and research papers. “There is no place for any word, which is even remotely critical of government policies. Our youth are being intimidated for decade old papers these days. It is the assortment of people’s freedoms that have taken a major hit,” he said.

On the occasion, YNC Salman Ali Sagar expressed gratitude to the functionaries for making it to the party headquarters.

About power cuts in Kashmir during the holy month of Ramadhan, Omar expressed his shock and stated that “it seems that we are deliberately being irritated.” “I wonder why power remains on during the rest of the hours during day and night but not at the time of Sehri and Iftaar. You wake to have Sehri, there is no electricity and same is the case when you have Iftaar. There is no electricity during Taraweeh prayers and when prayers are over, electricity is restored,” he said, adding that “it seems to be a deliberate attempt to disturb the people of Kashmir.”

On the Hijab, he said that it was the religious obligation and nobody has a right to interfere “in our religious matters.”.