Heavy snowfall: Many patients shifted to hospital on shoulder, in JCBs in south Kashmir 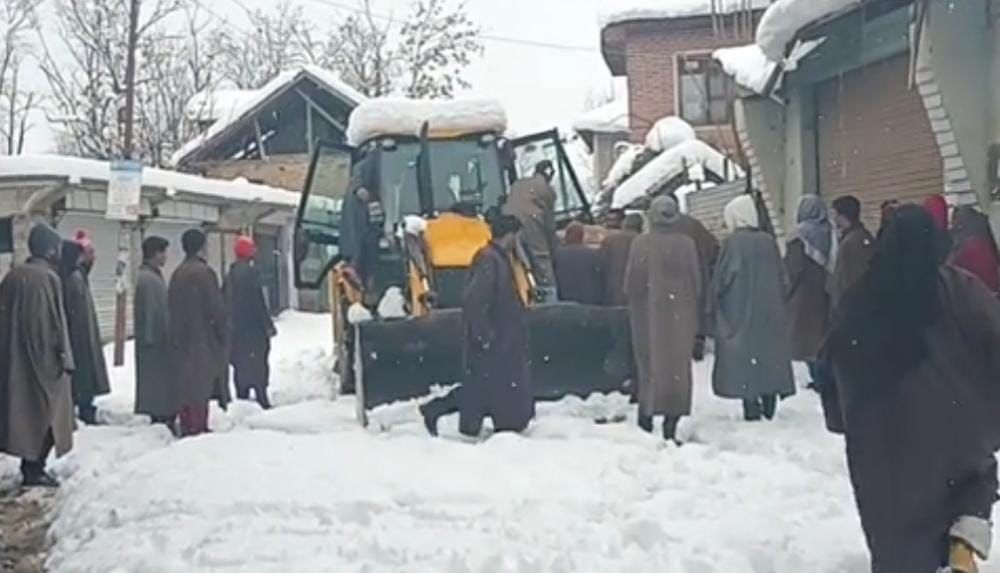 Srinagar, Feb 23: Due to the accumulation of heavy snow on roads in south kashmir, several patients were taken to hospital either on shoulders or in JCB  in different areas.

A lady was injured after a shed collapsed due to heavy snowfall in Achan village of Litter Tehsil in south Kashmir’s Pulwama district.

Locals said that a lady namely Arifa Banoo (45) wife of Mohammad Shafi Dar was cooking in a shed when it collapsed resulting in injuries to the said lady.

They have requested the administration to clear main roads at the earliest so that people won’t face any problems.

Officials said that a pregnant lady was also stuck at his home due to accumulation of snow in Abhama Rajpora area of Pulwama and the family wasn’t able to take the lady to hospital.

They said that family members contacted a concerned police station for help after which a police party headed by SHO Rajpora rushed to the spot along with JCB and ambulance.

The lady was taken to district hospital Pulwama for treatment, officials added.

Similarly, a lady from Lelhara Kakapora was also rushed to the hospital with the help of JCB on Wednesday.

“Family was unable to take her to hospital, however, after contacting the concerned police station, a JCB was arranged and helped her to reach the hospital,” he said.

Lady was shifted to PHC Kakapora where her condition is said to be stable.

Several patients were either taken on shoulders or in JCBs in Shopian and Anantnag district as well.

A pregnant lady from Batpora Shopian was taken to the district hospital on shoulders due to accumulation of snow on the roads.

Similarly a patient from Seepan Anantnag was also taken on shoulders for about three kilometres to reach hospital.

Meanwhile officials said the roads are being cleared and all essential services are being restored. kno