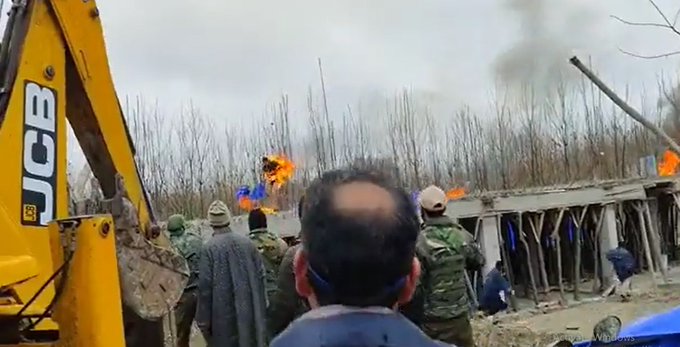 Srinagar, Feb 23: Following self-immolation by a youth during demolition drive in Ganderbal district yesterday, divisional commissioner Kashmir, P K Pole on Wednesday ordered transfer of Tehsildar Ganderbal and also appointed ADDC Ganderbal as enquiry officer to enquire the incident.
Notably, a youth received burn injuries after he attempted self-immolation during a demolition drive on the banks of Nallah Singh in Ganderbal district to prevent officials from demolition of a structure constructed in the area.
In an order, Pole has ordered transfer for Tehsildar Ganderbal to Bandipora for mishandling the issue.
“Taking cognizance of the media reports of unfortunate incident of alleged self-immolation in District Ganderbal. Khurshid Ahmad Shah, JKAS, Additional District Development Commissioner, Ganderbal is appointed as an Enquiry Officer to enquire into the whole gamut of episode,” reads the order.
It reads that he will furnish his findings along with his definite comments and recommendations within a period of 10 days positively.
“In the meantime, Tehsildar, Ganderbal is transferred with immediate effect and his services are kept at the disposal of Deputy Commissioner, Bandipora owing to mishandling the issue,” it reads.