“Article 370 roll back has complicated Kashmir issue, No alternative to dialogue with Pak,” says Mehbooba 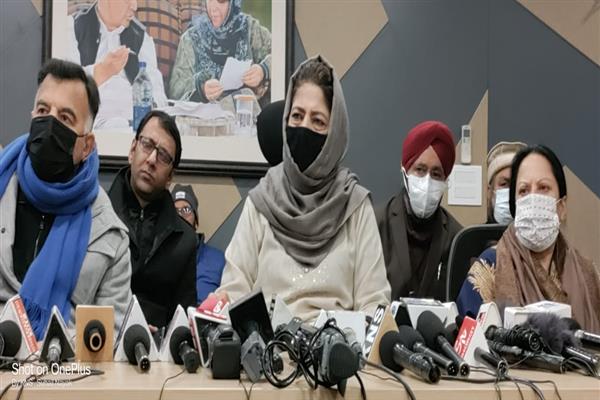 Srinagar, Feb 13: Peoples Democratic Party (PDP) chief Mehbooba Mufti Sunday said that article 370 revocation has in fact further complicated the Kashmir issue and that the BJP led government at the Centre will have no alternative other than to talk to Pakistan for resolution of issues including Kashmir.

Addressing a press conference at her Gupkar residence here, Mehbooba said that an impression that Kashmir issue was over after revocation of article 370 has proved totally wrong on ground.

“The fact remains that the roll back of special status of J&K has further complicated the Kashmir issue. One of the serious repercussions seen at the international level is that India is being isolated internally,” she said.

The PDP chief said that situation in Kashmir is worse than ever. “No one is feeling safe. Be that a common man or a journalist. Journalism is seen as a crime and truth is being throttled,” she said, adding that “many journalists including Sajad Gul, Fahad Shah and others are behind the bars. Many have fled Kashmir after being named in FIRs. How can things work and truth prevail in such conditions” She urged international bodies to raise voice for the immediate release of journalists arrested in Kashmir.

She said that democracy is being gagged in Kashmir and no one is allowed to raise voice. “I believe when Atal Bihari Vajapyee had no option other than to talk Pakistan, the BJP led by PM Narenera Modi too will have to follow suit. There is no alternative to dialogue with Pakistan for resolving all issues including the political issue of Kashmir,” she said.

About delimitation panel’s second draft report, she said that the commission has appeased BJP only by advocating something that is totally unacceptable to all.  “The report aims pitch one community against another in J&K, something BJP likes,” she said .

Mehbooba, however, said that PAGD will fight all the wrong policies of BJP in J&K tooth and nail

“Lot of efforts are being made to break the PAGD, but we will remain steadfast and fight altogether. The policies of BJP won’t last. Many rulers ruled J&K in the past but oppression has to end,” she said.

She said the entire India has been converted into a laboratory for experiments. “Now Hijab is a new plot. I believe this is an election stunt ahead of UP polls. This won’t stop here and will continue. They will identify more things attached to Muslims and make issues out of them,” Mehbooba said.

Asked J&K government claims that investors were investing in J&K, she said: “When people of J&K are feeling caged in a fortress and there is a total monitoring of all in one, how investments can help. They are even monitoring our thoughts.”

On why Ghulam Nabi Hanjura, a senior PDP leader, has resigned from the party membership, she said that Hanjura has been her great colleague. “He has some personal issues. He hasn’t quit the party and will be back with us soon,” Mehbooba said. kno