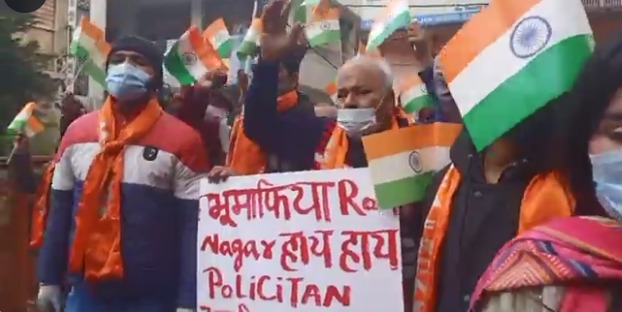 The protesters said that all the people including Gujjar and Bakarwals should be evicted from the land they have encroached in Jammu.

President ‘Shiv Sena Dogra Front’ Shiv Gupta in response to a volley of questions said that politicians have given patronage to these ‘encroachers’ and these politicians are all involved in land scams. He castigated Mehbooba Mufti for visiting Roop-Nagar to show sympathies with the tribals.

Gupta targeted every political party except BJP saying that due to political intervention in the past encroachers were able to encroach the state land in Jammu.

In response to a question, he said that even the residential house of former Deputy Chief Minister Dr Nirmal Singh should be raised to the ground if it is illegal.

He said Roop Nagar Demolition Drive has snowballed into a controversy due to the interference from politicians.

Pertinently, the demolition drive carried out by Jammu Development Authority last week has drawn flak with most of the political parties terming the drive as a ‘biased’ one aimed at targeting a particular community. knt