CM Business Interest Relief Scheme under CAG scanner: Out of 19 major beneficiaries, 10 were not affected by 2014 floods 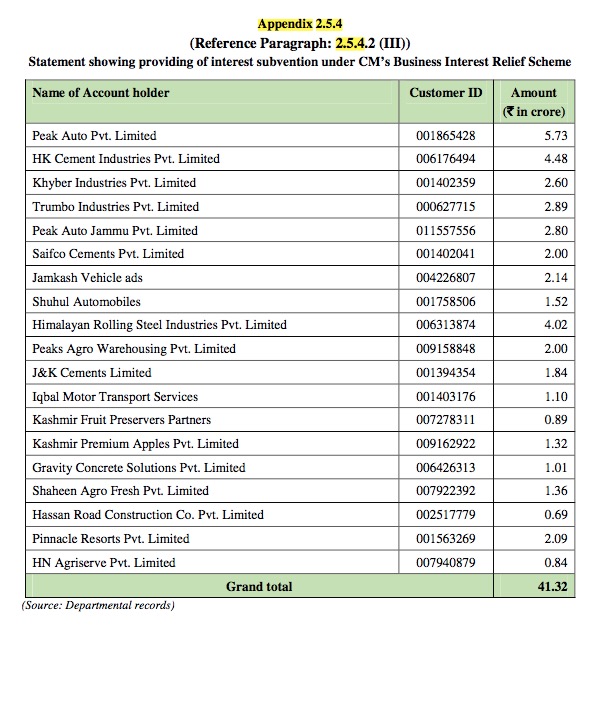 Srinagar, Jan 14: The Chief Minister’s Business Interest Relief Scheme(CMBIRS)announced by the previous PDP-BJP government has come under scanner, with the Comptroller and Auditor General of India pointing out that the scheme was not as per the guidelines of the interest subvention scheme of the Prime Minister’s Development Package(PMDP) for J&K.

The report also reveals ten out of 19 major beneficiaries were not at all affected during flood of September 2014 and they had been restructured only after the unrest of 2016 under special rehabilitation package.

“Further scrutiny of records (revealed that out of release of Rs 190.20 crore to Jammu & Kashmir Bank Limited , Rs 41.32 crore was provided to only 19 borrowers .Further, out of these 19 borrowers, accounts of ten borrowers to whom benefit of interest subvention of Rs 21.02 crore had been provided (between March 2018 and March 2019), were not at all affected during flood of September 2014 and they had been restructured only after the unrest of 2016 under special rehabilitation package,” the report states.

The CAG report further states that the Joint Director (Resources), Finance department stated in August 2020 that sanction was accorded (March 2018) for roll out of CMBIRS as per announcement made by the then Finance Minister in his budget speech 2018-19 and that the verification of genuine beneficiaries vested with JKBL.

“The reply confirmed that funds released by the GoI were diverted by the Government of J&K for its own commitment and not for payment under the scheme of interest subvention,” reads the report.