‘Slain SoG man was a brave cop, had got out of turn promotion 3 years ago’: DGP

'House owner misled forces about militant’s presence in his house, will act against him as per law' 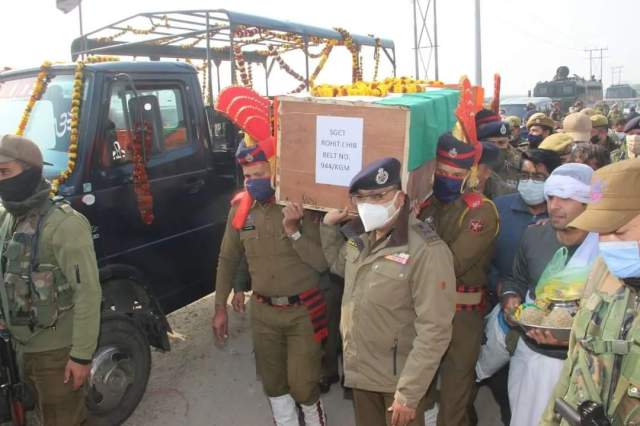 Kulgam, Jan 13: A top Jaish-e-Muhammad (JeM) militant and the counter-insurgency expert of Special Operation Group (SoG) of J&K police were killed while three soldiers and two civilians were injured in an overnight encounter at Pariwan area of southern district of Kulgam, police said Thursday.

A police officer said that based on specific input regarding presence of a militant in Pariwan area of Kulgam, a joint cordon and search operation was launched yesterday evening by Police and Army (34RR) in the area on Wednesday evening.

“During the search operation, as the joint search party approached towards the suspected spot, the hiding militant fired indiscriminately at the forces that was retaliated leading to an encounter,” the officer said.

A police spokesman said that while evacuating the civilians from the encounter site to safer places, one police personnel, three soldiers and two civilians got injured. “All the injured were immediately shifted to the hospital for treatment, however, police personnel SgCt Rohit Chibb succumbed,” he said adding that, “the condition of other injured including two civilians who had sustained minor injuries is stated to be stable.”

Director General of Police (DGP) Dilbagh Singh told reporters on the side-lines of the funeral of slain SoG man, Rohit Chib in Kulgam, that he was a ‘brave and talented counter-insurgency expert’.

“He had joined the force in 2011 and was working one rank up compared to his colleagues. Just three years ago, he was given out of turn promotion for his good work on the anti-militancy front,” the DGP said, adding that the in the Kulgam operation, he as usual was leading from the front.

The DGP said that two civilians injured in the encounter were made hostages by the militant resulting in their injuries while three soldiers were also injured in the gunfight, who all are stable.

“We will continue to carry out anti-militancy operations in Kashmir on the lines of year 2021 and target both foreigner and locals militants in clean operations,” he said.

Inspector General of Police Kashmir range, Vijay Kumarsaid  that in the ensuing encounter, one top Pakistani JeM militant Babar Bhai was killed and his body was retrieved from the site of encounter.

“As per police records, the killed militant was a categorized militant active since year 2018 in the areas of Shopian-Kulgam and its adjoining areas. He was wanted by law in several cases,” the IGP said, adding that incriminating materials, arms and ammunition including one AK-47 rifle, one pistol and two grenades were also recovered from the site of encounter. A police spokesman said that IGP Kashmir visited encounter site in Kulgam and also the SoG camp where he met police personnel, soldiers and CRPF. He also reviewed the security there.

Talking to reporters at Kulgam, the IGP said that the house owner had misled the forces about the presence of militant in his house.

“He deliberately misled the search team by saying no militant was hiding in their house which led to collateral damage. Therefore, action under the law will be taken against him,” the IGP said. He also said that so far 14 militants have been killed during the current year out of which seven are foreigners including one killed at LoC in Kupwara. kno