Army management studies board seminar on ‘The symbiotic relationship: OGWs and conflict economy in JK 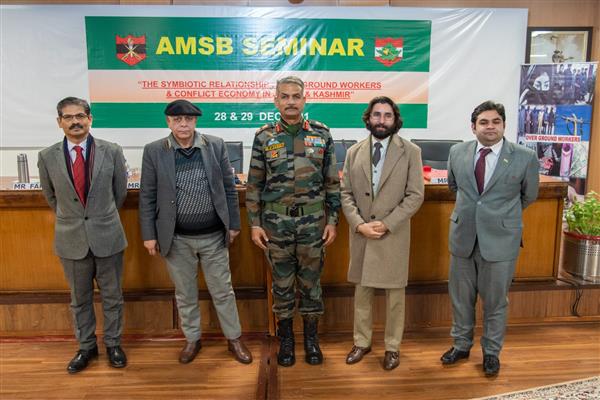 The Seminar is being attended by leading experts on the subject matter, including research scholars, journalists, activists, serving and retired government officials from within and outside Jammu and Kashmir.

In his opening address, Lt Gen DP Pandey, GOC, Chinar Corps highlighted the role of OGWs in sustaining terrorism and the conflict economy in Kashmir.

The General Officer, elaborated the differentiation between ‘Terror’ and ‘Ism’, which together made up the totality of terrorism in the Valley. While terror is being tackled through the kinetic means, it is the ‘Ism’ part of this network, which needs to be tackled to bring peace in the Valley.

He also elaborated upon the network that runs the Pakistan’s narrative, which provides a steady supply of misguided youth to sustain the cycle of violence.

Today, the Seminar covered three sessions on the OGW nexus, it’s calibrated infiltration into the state institutions and enablers of this entire nexus.

Lt Gen Saha enlightened the audience through his talk and experiences in the Valley and emphasized upon the expanding Grey Zone which was being exploited by the OGWs.

RR Swain spoke of the ‘Five Battles’ that need to be won in order to defeat the scourge of terrorism.

Each of the other speakers, which included Basheer Assad, Yana Mir and Imtiyaz Hussain, Junaid Mir, Emaad Makhdoomi, Raja Muneeb, Javed Beigh and Sajid Yusuf Shah, conveyed their points of view to arrive at a suitable roadmap to tackle this nexus.

Various speakers and attendees brought out that OGWs network that merge with the society is a bigger challenge than the gun wielding terrorist. It was felt that this network need to be countered by a joint effort of all pillars of the state and civil society.

The seminar is being conducted in five sessions over two days and is being attended by a large number of people from all walks of life. The seminar proceedings are being streamed live to civil and military audiences including think tanks within J&K and across India. kns