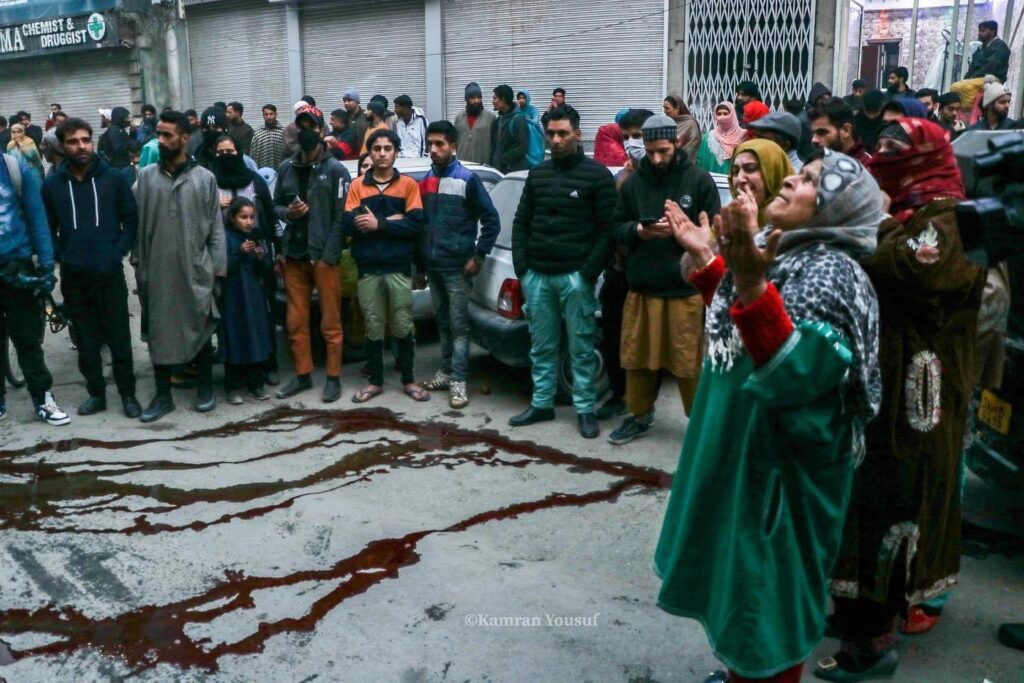 Srinagar, Nov 24: Three militants including a TRF (Lashkar-e-Toiba) commander were killed in a shoot-out at Rambagh area of Srinagar on Wednesday, police said.

A police official said that acting on a specific lead about the three militants travelling in a vehicle in Srinagar’s Rambagh area, a team of Srinagar police cornered the vehicle and killed three militants.

Inspector General of Police (IGP) Kashmir Vijay Kumar said that among the slain trio, one has been identified as Mehran, a top TRF commander who was involved in the killing of two teachers and other civilians in the city. “The militants were travelling in a car and they were signaled to stop but instead, they opened fire in a bid to flee from the spot but were cornered by the police party,” he said.

As per police records, Mehran Yaseen Shalla, a resident of Jamalatta area of old Srinagar, went missing on May 19, 2021 and joined TRF (LeT). The two other slain militants were identified as Arafat Ahmed Sheikh of Niklora, Pulwama and Manzoor Ahmed Mir of Babhar, Pulwama.

A police spokesman in a statement to KNO said that acting swiftly on “our own specific input” regarding movement of militants in Rambagh area of Srinagar, a small team from Srinagar Police signalled a suspected Santro vehicle to stop. “However, the militants started firing indiscriminately on the police party from inside the car while trying to flee from the spot under the cover of firing. The fire was however effectively retaliated leading to gunfight,” the spokesman said, adding that “In the ensuing gunfight, three militants got killed and identified as militant commander of LeT (TRF) Mehran Yaseen Shalla, resident of Jamalatta, Srinagar, Manzoor Ahmad Mir resident of Babhar, Pulwama and Arafat Ahmad Sheikh, a resident of Nikloora, Pulwama.

The spokesman said that as per police records, the killed militants were linked with LeT (TRF) and part of group involved in several  crime cases including attacks on security forces and civilian atrocities.

“Mehran Yaseen had a long history of crimes and was wanted by law for his involvement in several crime cases including grenade attack at Barbar Shah Srinagar on 26/06/2021 in which one civilian namely Mudasir Ahmad Bhat resident of Hanjigund Beerwah got killed & three other civilians got critically injured, killing of  Meeran Ali Sheikh at Bulbul Lanker Nawa Kadal on 27/07/2021, Killing of PSI Arshad Ahmad at Khanyar on 12/09/2021, Killing of School Principal Supinder Kour and teacher Deepak Chand of Government Higher Secondary School, Khankah Noorbagh Sangam on 07/10/2021,” the police spokesman said adding that “Prior to joining militancy, several cases regarding his involvement in stone pelting incidents are also registered against him. Moreover, the other killed militant Arafat Ahmad was also involved in several cases including killing of a non-local labour at Litter area of Pulwama on 16/10/2021.”