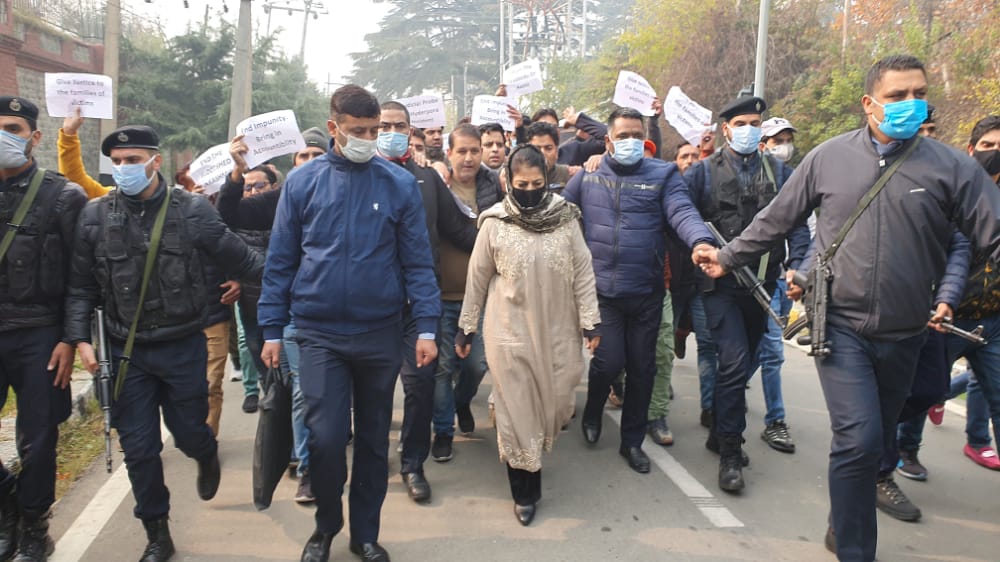 “The label of OGW and hybrid militant should be removed from the names of Mudasir and Aamir. The culprits behind the killings of these civilians should be put behind bars and should be given a strict punishment,” she said.

She also said that the families should be provided with compensation and LG should himself apologize to them for this barbarious act of oppression.

Mehbooba said that a judicial probe should be carried out to inquire the Hyderpora incident as their familes have alleged that they have been used as human shields by the forces.

“The security forces were not sure about the presence of militant in the building and till now nobody knows whether any militant was killed in that encounter or not,” she said.

She also said that the body of third civilian who has been labeled as “hybrid militant” should be returned back to his family.

Mehbooba also said that everyone in Kashmir has been deprived of their basic human rights.

“By abrogating article 370, the government has ruined the credibility of the constitution of India. Every act is done unconstitutionally by the government across the nation. The agenda of RSS and BJP is to suppress the minorities of the country especially Jammu and Kashmir as we are a Muslim majority state. Vicious cycle of atrocticities are being committed on the people of Jammu and Kashmir just because we are Muslims,” she said.

She said that nobody has a right to talk in Kashmir and everyday journalists are being questioned, they are being detained, and harassed.

“The media which is the fourth pillar of democracy but in Kashmir it has been silenced on gunpoint. Leading newspapers are being asked to vacate their offices so as to suppress them because they don’t want them to report the truth and doesn’t work. They want them to work for them same as godi media,” she said.

She also said that the people of Kashmir had chosen India based on its democratic principles and secularism, but they had never imagined that they would have to beg before this country for the bodies of their loved ones.

“The police had claimed that four people were killed in the hyderpora encounter. Where is the body of the militant then? Nothing is yet known about the militant, they have just killed three innocent civilians leaving the entire valley into a state of pain and despair,” Mehbooba said.

Notably, People’s Democratic Party led by it president, Mehbooba Mufti today held a protest march towards Raj Bhavan in Srinagar, demanding the return of body of third civilian and punishment to culprits behind Hyderpora killings. kns