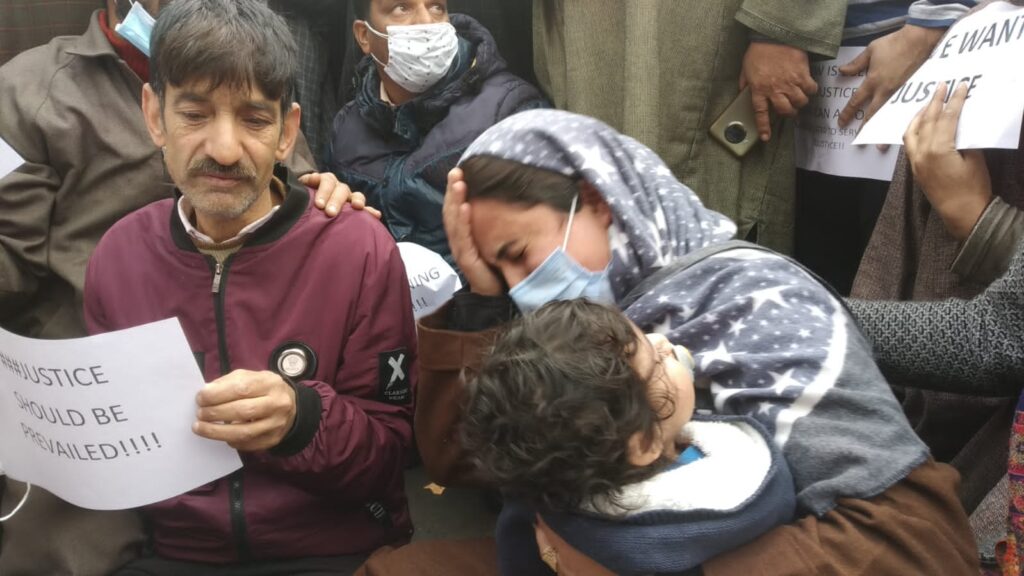 Srinagar, Nov 17: Humaira Gul, the wife of Dr Mudasir Gul, who was killed in Hyderpora encounter, Wednesday staged a protest along with other family members at press colony and stated that her two-year-old daughter has been crying, baba, baba and she had no answers to her. She said police must come up with a proof that her husband was an OGW and the fact is that “my husband had no militant links and was earning his livelihood in a clean manner.”

“My year-old-daughter has been crying since yesterday looking for her father. She cries baba, baba, and I have no answers to her. I urge LG Manoj Sinha to allow my daughter to see her father for the last time,” Humaira told reporters at press enclave Srinagar. She said the police must give her proof about her husband being an OGW. “Police can kill me also if my husband is proven as an OGW,” said Humaira, while holding her daughter in her arms. “My husband wasn’t an OGW but a doctor by profession. He was earning his livelihood in a clean manner. In fact, in a marriage party at Rawalpora recently, police officers and the officers from the administration had lunch with Mudasir. How come the police label him as OGW,” she said.

Other family members of slain Dr Mudasir were also part of the protest who demanded return of Mudasir’s body back for proper burial. “We appeal LG Manoj Sinha and IGP Kashmir to return the body of Dr Mudasir so that his daughter can see him one last time and we all could bid him a final adieu,” the protesters said.

Mudasir was among four slain in the Hyderpora encounter. Police said Mudasir was living in a rented room in a building where the encounter took place and that he had allowed slain militant Haider to use his rented room as a hideout. Police also said that Mudasir had ferried Haider in a vehicle from Jamalata area of Srinagar where police was injured in militant firing and was an OGW. kno