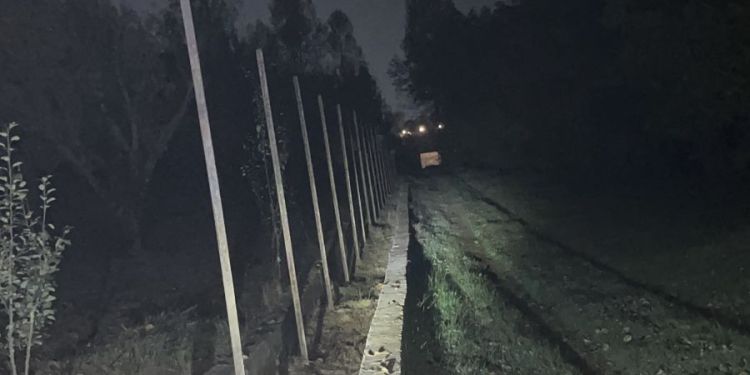 Srinagar, Nov 09: Acting upon the complaints of locals about the alleged encroachment and illegal construction of forest land in the Kralsangri area of Nishat in Srinagar by a known hotelier, police has booked the owners and started investigations.

Official sources said that the owners of a known hotel in Srinagar have allegedly encroached upon the forest land in Kralsangri and started construction of huts and fencing of the land which was objected to by the locals and they filed a complaint with the police.

Sources said that the police has lodged FIR number 113 Under Sections 188 and 447 in Nishat against the owners after locals complained to the police about the encroachment of the forest land on the back side of Kralsangri area.

Sources further said that the owners have fenced several kanals of forest area, started constructing wooden huts and raised concrete walls which are endangering the habitat of the wildlife. The owners have also chopped and pruned the pine trees, they said.

Sources said that the forest officials and the LCMA are watching as mute spectators and have not lodged any FIR against the encroachment of the forest land.

The owners have in previous regimes allegedly encroached kanals of forest land in their name with the connivance of the forest officials, sources added.

Altaf Hussian, Wildlife Warden, Central Division, said that a team led by him visited the spot on Monday and stopped all the construction work.

“The concerned person claims ownership of the land and to prove its veracity, a joint team of departments concerned will inspect the site on Wednesday to ascertain the facts about demarcation,” Hussian said.

Divisional Forest Officer (Urban), Abid Nazir, said that the land is milkiyat of the owners and not encroachment but falls in a buffer zone.

The locals are aghast with the forest officials and LCMA for watching the happenings at the site but lauded the police for swift action into the matter.

However, the alleged accused party said that the allegations of encroachment and construction are false. “We have not done anything illegal and we don’t know that the police has filed an FIR against us,” he said. kdc