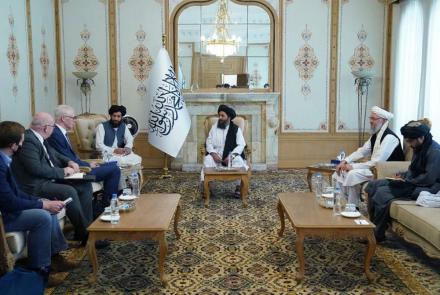 Baradar and Hanifi in the meeting said the Islamic Emirate wants good relations with the world’s countries, and they will not allow anyone to threaten any country from Afghanistan, the statement reads, reports said.

Baradar and Hanafi also said the frozen bank assets of Afghanistan should be released because the situation is adding to the poverty and economic problems in the country, said reports.

“According to the statement, Hanafi and Baradar said the Islamic Emirate will facilitate conditions for international humanitarian organizations to deliver aid to vulnerable Afghans.”

Gass also said the United Kingdom wants to have good relations with the Islamic Emirate, adding that hunger and poverty in Afghanistan is a benefit to no one, the statement as per reports reads.

Gass added that UK will continue its humanitarian aid to Afghanistan via the United Nations and international humanitarian organizations. He reiterated for the importance of girls’ education, the statement reads.