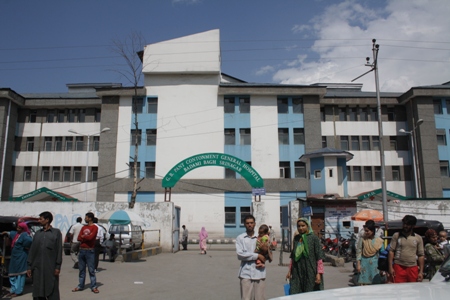 Srinagar: Attendants at GB Panth hospital on Monday said that hospital not only lacks nursing staff as a result ailing neonates suffer badly but the callous attitude of some para-medics is really annoying and cause of concern for parents.

GB Panth Hospital located at Sonwar Srinagar is always in news for one or the other reason. It is being claimed that the hospital lacks space but now attendants are claiming that the hospital also lacks supporting staff. They allege that attitude of some para-medical staff at the hospital is callous and they don’t feel the pain of parents whose neonates are admitted in the hospital for different ailments.

An attendant said that his infant son has been admitted due to severe vomiting. He said the continuous vomiting has made his son feeble and he can’t even talk, walk or move from the hospital bed.

“I was shocked when a nurse refused to take his sample on the hospital bed and forced me to bring my son to her room. Despite repeated requests, the nurse didn’t oblige,” he said.

Another attendant said that nursing staff has become so arrogant that they don’t bother to listen to anyone. “It’s all because of lack of accountability,” he said, adding that a bed is being shared by two to three patients in the hospital. knt