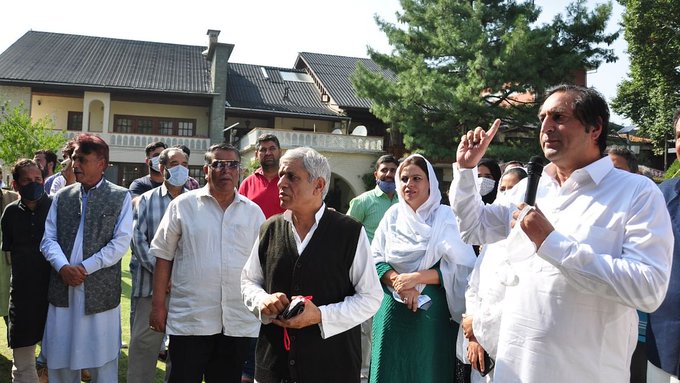 Srinagar, Oct 02: In a major boost to Peoples Conference, senior politician and former MLA Bandipora Nazimuddin Bhat on Saturday rejoined the party, reviving his four-decade old ties with the political force, which has emerged as a major challenge to National Conference.

Bhat, a two time-lawmaker, along with his hundreds of workers from Bandipora assembly segment rejoined the party in presence of its chairman Sajad Gani Lone and other top leaders at a function held here.

“We welcome Nizam sahib back in the party and we are hopeful  that he will help the party efforts in scripting an agenda for change and help navigate J&K out of the web of disempowerment a dignified manner,” Lone said.

Bhat had started his political career from PC and fought 1983 and 1987 polls on its ticket from Bandipora. In 1987 polls, which is believed to have been rigged, Bhat lost by a narrow margin to NC candidate.

Lone said that besides mass appeal, Bhat is bestowed with intellectual and analytical qualities and that his connection with the masses will play a significant role in the party’s overall growth and strength on the ground.

“There is a certain level of emotion in welcoming Nizamuddin sahib back to the party fold. Nizam sahib was one of the founding members of the JKPC and the party archives remember him as an idealistic young man driven by a desire for change. Nizam sahib took a hiatus from politics and joined journalism. This is how he exited the JKPC. It is a sheer pleasure for all of us here at the JKPC to have Nizam sahib back with us. He is one of those rare politicians in J&K who are connected to the ground and have the unique ability of communicating with the masses,” Sajad said.

“He brings with him a deep understanding of the intricacies of issues faced by J&K, a keen analytical mind, and timeless youthful energy. The veteran party cadres are excited to have him back and join us in welcoming Nizam sahib”, he added.

Sajad underscored that the people of J&K have been trapped post August 5, 2019 and that the Peoples Conference will stand up for them in our united quest to retrieve back what is rightfully ours.

Speaking on the occasion, Bhat said that rejoining PC was nothing but a home coming for him as he has played a crucial role in its formation at the very onset.  “And today, based on my decades of experience, I can tell you with utmost certainty that Sajad Lone is the only political leader who can honestly and sincerely and without any paradoxes lead the people of Jammu and Kashmir. Power and government formation is not the party’s sole agenda. PC shall play a crucial role in according the dignity and honor back to the people of Jammu and Kashmir,” he said.