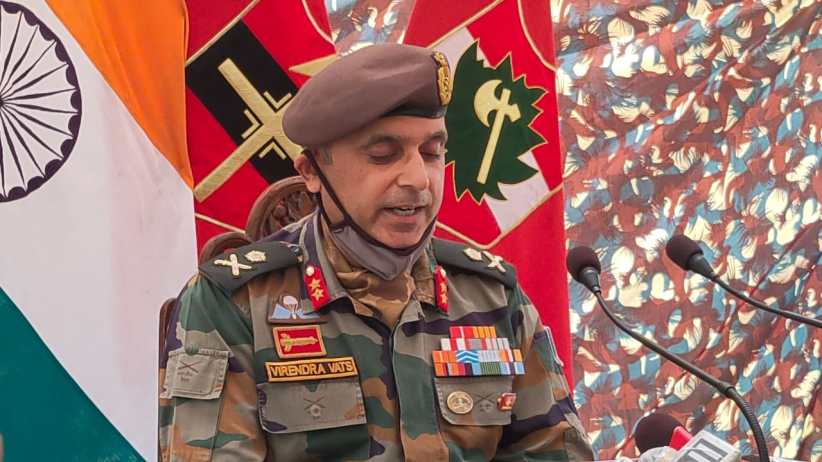 Uri, Sept 28: Army on Tuesday said that seven militants were killed in last one week, five of them at Line of Control.

Addressing a presser here, Major General Virendra Vats, GOC, 19 Infantry Division, said that a 19-year- old militant was also apprehended in keeping with the “ethos and value system of Indian army that we do not use force against any unarmed person.”

The army officer also claimed that there was lot of movement on militant launch pads close to LoC and that there was desperation on part of Islamabad to send in militants to create disturbance and carry some kind of “sensational strike” in Kashmir.

“This (second) operation started on 18 of September night that is when our patrol along the Line of Control detected an infiltration movement. This resulted in a fire fight. When all facts were examined, we realized that this infiltration group was of six persons,” he said, adding, “When the encounter started, two of infiltrators had come across the fence while four were on the other side of fence.

These four (militants) who were on the Pakistani side, they took advantage of the dense foliage and darkness and retreated towards Pakistani side.”

He said the two militants sneaked into this side of the fence. “Once we realized all this, additional forces were mobilized to cordon these (militants). Because this area has lot of civilian population, we had to exercise due discretion to avoid any collateral damage. All this happened on the night of September 18.”

Thereafter, he said, once the cordon was stepped up , these militants tried to sneak out on number of occasions and there were fire exchanges during the intervening period.

“Finally our troops pinned down on these (militants) who were holed up in a nallah on the evening of 25 September . Thereafter an encounter ensued and one of the (militants) was neutralized on morning of September 26. His accomplice, pleaded to spare his life. There was lot of shouting,” he said, adding, “As is the ethos and value system of Indian army, we do not use force against any unarmed person so due precaution was taken and he was taken into custody.”

The army officer said that the apprehended person made some “revelations.”

“ He identified himself as Ali Baba Batra (19) son of late Mohammad Lateeef resident of Punjab Pakistan. He has admitted that he is a member of LeT and was trained by the outfit. He revealed that he went for 3 weeks course at Khyber camp Muzaffarabad in 2019,” the army officer said, adding, “After training he was sent home and was recalled for important task this year. He has given contact number of his mother which is 03013668927.”

The army officer further said that while the apprehended person claims that he was informed by handlers to drop a supply in area of Pattan “but looking at the recoveries and modus operandi, it was quite possible that this infiltrating group had come for some kind of strike which went beyond just dropping supply.”

“This infiltration attempt was made in the area of Salamabad nallah. This is the same area through which we have had history of infiltration in 2016 that is when suicide attack on Uri Garrison took place,” he said, adding, “It is revealed that this infiltration group was supported from Pakistani side by three porters who had come till LoC along with supplies.

The Pakistan post opposite this area is the Jabbri post and the movement of this large group of people cannot take place with active complicity of Pakistan army.”

The army officer further said: “we have also seen there has been lot of movement in launch pad across LoC. You will also recall that infiltration attempt was made on September 18 when three (militants” were neutralized in neighboring area. This shows desperation of Pakistan that when there is peace and tranquility in Kashmir, this is not something of Pakistan liking. There is desperation to send in (militants) to disturbance and some create kind of sensational strike.”

In last 7 days, he said, 7 militants have been “neutralized and one apprehended along LoC.”

“ Five of these neutralizations have come along the LoC. The major recoveries in two operations on LoC are 7 Ak series rifles, 9 pistols and revolvers and 80 grenades of various kinds along with Indian and Pakistan currencies.” gns