‘Those who take up arms against nation, will be given same response’: Amit Shah 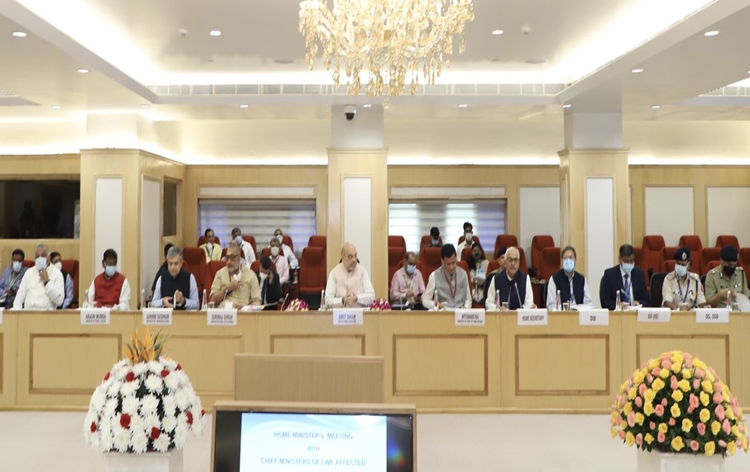 Delhi: Home Minister Amit Shah yesterday chaired a review meeting on Left Wing Extremism in New Delhi. Speaking on the occasion, Shah said, under the leadership of Prime Minister Narendra Modi, the Government is committed to the development of states affected by Left Wing Extremism, the All India Radio reported.

He said, under the leadership of Prime Minister Narendra Modi, there has been a lot of success due to the joint efforts of the Centre and the states in cracking down on Left Wing Extremism. He said that the incidents of Left Wing Extremism have come down by 23 per cent and the number of deaths has also come down by 21 per cent. Shah said that in decades of fighting, we have reached a point where the death toll is less than 200 for the first time and this is a huge achievement for all of us, added reports.

“Home Minister said, the Government has been fighting a battle on two fronts for many years without paying attention to the political parties. He said that those who want to give up arms and join mainstream are heartily welcome, but those who take up arms and hurt innocent people and the police, will be given the same response. He said that the root cause of dissatisfaction is that development has not reached there in last six decades since Independence and now to deal with it, it is very essential to ensure accessibility to fast-paced development so that common and innocent people do not join them.”

Shah said that under the leadership of Narendra Modi, the development is continuing and now the Naxalites have also understood that innocent people will not be misled by them. He urged the states that the Chief Secretaries of the affected states to hold a review meeting with the DGPs and officers of central agencies at least every three months to deal with Left Wing Extremism. He said that in the last two years, a huge and successful effort has been made to increase security camps in areas where security was not stringent, especially in Chhattisgarh, as well as in Maharashtra and Odisha. Home Minister said that the fight against the problem, which has claimed the lives of more than 16 thousand civilians in the last 40 years, has now reached its end and it needs to be accelerated and made decisive, added reports.

Shah said that recently, the Government of India has been successful in getting many extremist groups surrender and lay down arms, especially in the North East. He said, So far, about 16 thousand cadres have joined the mainstream of the society, including the Bodoland Pact, the Bru Pact, the Karbi Anglong Pact and the surrender by the insurgent cadres of Tripura, added media reports.

“Home Minister said that it is very important to neutralize the sources of income of the Left Wing Extremists. The agencies of the Central and State Governments should try to stop this by making a system together. He urged all the Chief Ministers to give priority to the problem of Left Wing Extremism for the next one year, so that a permanent solution can be found in this problem.” (airnews)