Number of militants, recruitment into their ranks have come down in Kashmir: DGP

Says Active Militants, OGWs Less Than Half Of What Is Was Previously In North Kashmir 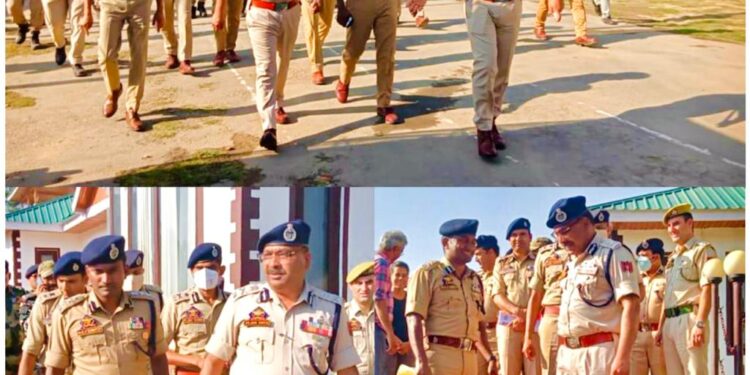 Kupwara, Sept 18: Director General of Police Dilbag Singh on Saturday said that recruitments into militant ranks have reduced while active militants are “less than half of what it used to be in the past.”

The top police officer of the J&K made the remarks while talking to media men following a visit to Kupwara where he visited family of the police officer killed in Khaniyar Srinagar and reviewed security situation with top police, army, BSF and CRPF.

To a question about the number of militants and OGWs in north Kashmir, the DGP said: “Sharing the number is not important but what is significant is that there numbers have reduced to less than half of what it used to be in the past.”

To a question that on one side that security agencies keeping on claiming that militancy graph has been brought down and while on the other hand incidents of militancy keeping on repeating, the DGP said: “ claims by police and security agencies are based on facts. We have carried many successful counter-, militancy operations. Number of (militants) have come down. Militant infrastructure has been destroyed to a large extent and many leaders have been eliminated.”

He added: “These incidents are outcome of such frustration by pro-Pakistan militants that they kill innocent people. Yesterday one of our colleagues was killed. A non-local labourer was killed. Tell me which religion and faith allows it?”

He further said that “these elements will be given severe punishment here and they will be punished (in world hereafter) also.”

“I will reiterate that peace is taking roots and this environment is not conducive for those who are working against it.”

Regarding the purpose of his visit to Kupwara, he said: “As you know, one of our colleagues Probationary sub-inspector (SI) Arshid Ahmad was killed in Srinagar while performing duties. We are proud of his martyrdom and at the same time we have grief and sorrow and such we came to offer condolences to the families.”

He said while interacting with public there, people expressed resentment “which depicts that people are supporting the role of police.”

“Those responsible for the killing will be soon brought to book,” he said adding, “Family of Asrhid have with patience understood that role of uniformed men and dangers facing while performing duties. We will continue to face such dangers. We offer tributes to him.”

He also “reiterated” that police will continue to fight against militancy and “we will continue to work for maintaining peace and create environment in which people will perform their routine work without any disturbance.”

“We also held a security review meeting with police, army, BSF and CRPF. We decided on what actions we need to take in future for strengthening peace and security,” he said. gns