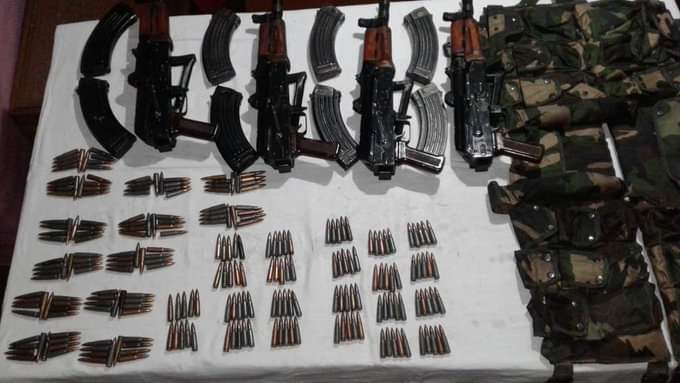 Srinagar, Aug 03: The Ministry of Home Affairs (MHA) Tuesday informed the Parliament that a total of 100 AK series rifles with 100256 ammunition was recovered by the security forces along the Line of Control (LoC) between 2018 to 2020.

Giving details through a written reply the Minister of State (MoS) for Home Nisith Pramanika said that a total of 100 AK rifles with 10026 ammunition, 79 Pistols with 1676 ammunition, 22 UBGL, 107 UBGL Grenades, 248 Hand Grenades, 6 Improvised Explosive Devices (IED), 4 each  RPG and M4 Carbine, 1 Pika Gun, 6 Kilogrmas of Explosive and 14 Detonators were recovered near Line of Control (LoC) in past three years.

The reply reads that the Government has adopted a multi-pronged approach to counter cross border crimes i.e. infiltration, militancy, smuggling etc which has an appropriate mix of technology and human resource. “Innovative troop deployment, proactive use of surveillance and monitoring devices has enhanced the ability to detect and intercept militants attempting infiltration/ exfiltration,” the reply said.

It further states that the security forces regularly carry out threat assessment and analysis of past infiltration attempts and based on these reviews, drills and procedures are modified to counter emerging threats”, reads the reply. “The Government has formulated Defence Cyber Framework with responsibilities assigned to various agencies.”

It further reads that the forces are continuously upgrading their systems and procedures to check and prevent cyber threats.

“To enhance the cyber warfare tactics, continuous training and upgradation of technical skills for personnel are being undertaken”, it reads.