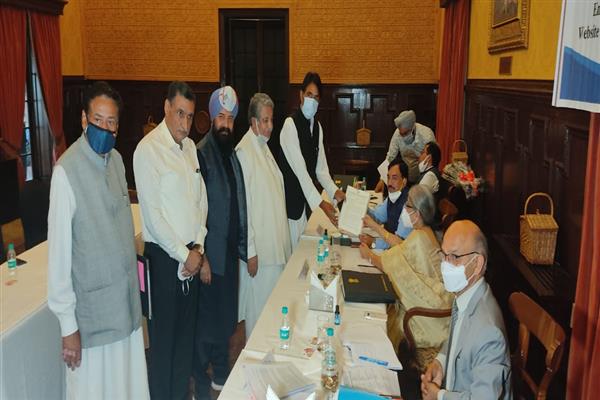 The memorandum submitted to Delimitation Commission reads that in the All-Party Meeting dated 24th June, 2021;

“Prime Minister and Home Minister had assured of adopting a transparent method by the Delimitation Commission right from the State level to the Constituency level. We accept this assurance in the spirit of restoration and strengthening of democratic structures in Jammu & Kashmir,”.

Congress party also told the Commission in the Memo that the initiation of political & democratic dialogue in Jammu & Kashmir must begin with restoration of civil liberties of political parties and people.

“The unlawful detention of political leaders and their incarceration for long period without any charges is itself an anathema to the founding principles of democracy under our Constitution. The Government must initiate an exercise for undoing the shackles on democratic exercise of rights and end the incarceration of political leadership as a step towards strengthening of grassroot democracy in Jammu & Kashmir. Only then will the delimitation exercise shall have some meaning,” it said.

The aspiration of people of Ladakh to determine their democratic foundations within the four corners of the Indian constitution must be severely respected, Party told the commission

“People of Jammu and Kashmir have grave apprehensions of preconceived political prejudice governing the Commission’s final recommendations with a view to give unfair and undue advantage to a particular political party and to the exclusion of democratic rights of the people for a just and amicable delimitation process and particularly to put the mainstream political parties in a disadvantageous position on account of innate unfairness,” it read

The Memorandum further reads that It is, as such, incumbent upon the Delimitation Commission, which is a Constitutional body, to stand by the test of equity, equality, fairness and transparency as per the mandate given to it by the Parliament of India and to conduct the delimitation exercise with utmost integrity, in accordance with the established and time-tested principles and without a shade of bias and unfairness towards the ruling party at the Centre.

“Finally, as per the established procedure and precedents, we expect that the draft recommendations of the Commission would be shared with all the political parties for inviting their objections/suggestions with adequate notice and material. The Commission must, then, proceed to grant a fair hearing to INC and other political parties with an open and judicious mind before finalizing the recommendations, besides the draft recommendations should also be accessible to members of the public so that anyone can give their suggestions in the interest of strengthening the democratic structures, “Party demanded in the Memorandum.

INC assures the Commission of its cooperation with a view to restore full Statehood for Jammu & Kashmir, Party assure, the Memo concluded.