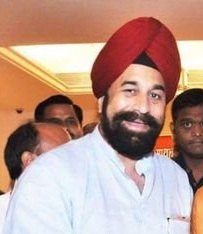 Srinagar, Jul 04: Stating that some people were trying to play politics over the issue of conversion of two Sikh girls to Islam in Kashmir, Bharatiya Janata Party (BJP) Sunday said that the party was not supporting such agenda and will always ensure communal harmony within Jammu and Kashmir.

BJP’s National Spokesperson, R P Singh said he has met some people few days back, who apprised him about the conversion of two Sikh girls to Islam.

“We as leaders from a big party have to meet everyone to listen to their pleas. Similarly, I have met some leaders, who talked about such an issue in J&K,” he said, adding that it was found that some people were playing politics and BJP will never ever support them in this agenda. We (BJP) will always ensure communal harmony in Jammu and Kashmir among all sects,” Singh said.

He also appealed people in Jammu and Kashmir to maintain communal harmony, displayed by them from time to time since paat several decades. kno