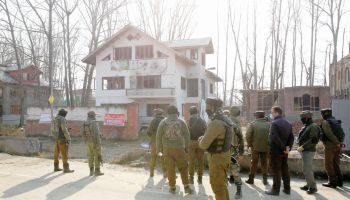 Srinagar, June 3: Police on Thursday said that “sincere” efforts for surrender were made to make the man, who had allegedly locked himself in an interrogation centre inside SOG camp in Tral area of south Kashmir’s after snatching rifle of a cop, before he was killed in an overnight encounter.

He was arrested on May 30 along with “incriminating materials viz. arms, ammunitions and explosives including unlicensed 12 bore gun, live rounds, explosives, iron/steel balls, 9 feature phones and other warlike stores used in fabrication of IEDs”, police said

“A case FIR No. 48/2021 under relevant sections of law was registered at Police Station Tral.

The (militant) operative was on Police remand and on 2/6/2021 he was brought from Police Station Tral to the Police Component, Tral for further interrogation,” the spokesman said, adding, “During the interrogation (he) got hold of the service rifle (AK 47) of CT Amjad Khan and fired indiscriminately with intention to kill the Police personnel.”

“(He) then took total control of the interrogation room and engaged the Police personnel by firing intermittently from the snatched weapon,” the spokesman said, adding, “Sensing grave danger to the lives of Police personnel and that of the (militant) operative, his mother and Executive Magistrate were brought on the site and repeated sincere efforts were made to persuade him to through away the weapon and surrender.”

After failing of all efforts to ensure his surrender, he was engaged in a gunfight “following the rules and SoP of such engagement and was neutralised.”

“The snatched weapon was recovered from (his) possession,” the spokesman said, adding, “In this regard, a case FIR No. 61/2021 under relevant sections of law stands registered at Police Station Tral and investigation taken up.”

Amin’s Body has been sent to Police Hospital Srinagar for medico-legal formalities, the spokesman said.

“It’s pertinent to mention that the slain was active (militant) of Hizb ul Mujahideen in the past and was arrested in 2003. Further, his brother Shabir Malik was also a (militant) of AGuH outfit who was killed at Brenpathri in 2019.” gns