43 killed in Gaza as Israel carries out hundreds of airstrikes 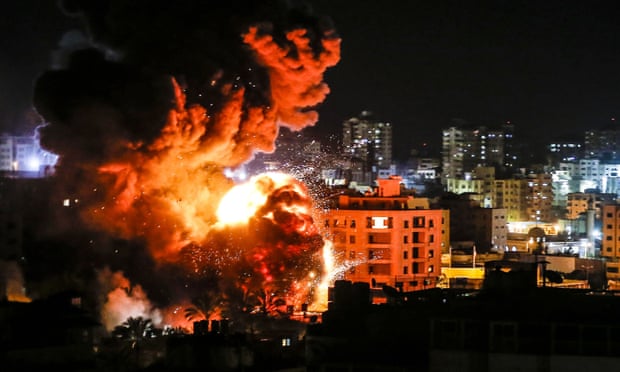 GAZA/JERUSALEM: Israel carried out hundreds of airstrikes in Gaza on Wednesday and Palestinian fighters fired multiple rocket barrages at Tel Aviv and the southern city of Beersheba in the region’s most intense hostilities in years, Reuters news agency reported

One multi-storey residential building in Gaza collapsed and another was heavily damaged after they were repeatedly hit by Israeli airstrikes.

Reuters reported Israel claimed its jets had targeted and killed several Hamas intelligence leaders early on Wednesday. Other strikes targeted what the military said were rocket launch sites, Hamas offices and the homes of Hamas leaders.

The heaviest offensive between Israel and Hamas since a 2014 war in the Hamas-ruled enclave has increased international concern that the situation could spiral out of control, the report added.

“Israel has gone crazy,” said a man on a Gaza street, where people ran out of their homes as explosions rang out.

“The cost of war in Gaza is devastating & is being paid by ordinary people. UN is working w/ all sides to restore calm. Stop the violence now,” he wrote.

Gazans homes shook and the sky lit up from Israeli attacks, outgoing rockets and Israeli air defence missiles intercepting them. At least 30 explosions were heard within a matter of minutes just after dawn on Wednesday, the report said.

According to the report, the violence followed weeks of tension in Jerusalem during the Muslim fasting month of Ramazan, with clashes between Israeli police and Palestinian protesters in and around Al-Aqsa Mosque, on the compound revered by Jews as Temple Mount and by Muslims as the Noble Sanctuary.

These escalated in recent days ahead of a – now postponed – court hearing in a case that could end with Palestinian families being forcefully evicted from East Jerusalem homes claimed by Jewish settlers.