People throw caution to wind to prepare for Eid festivities 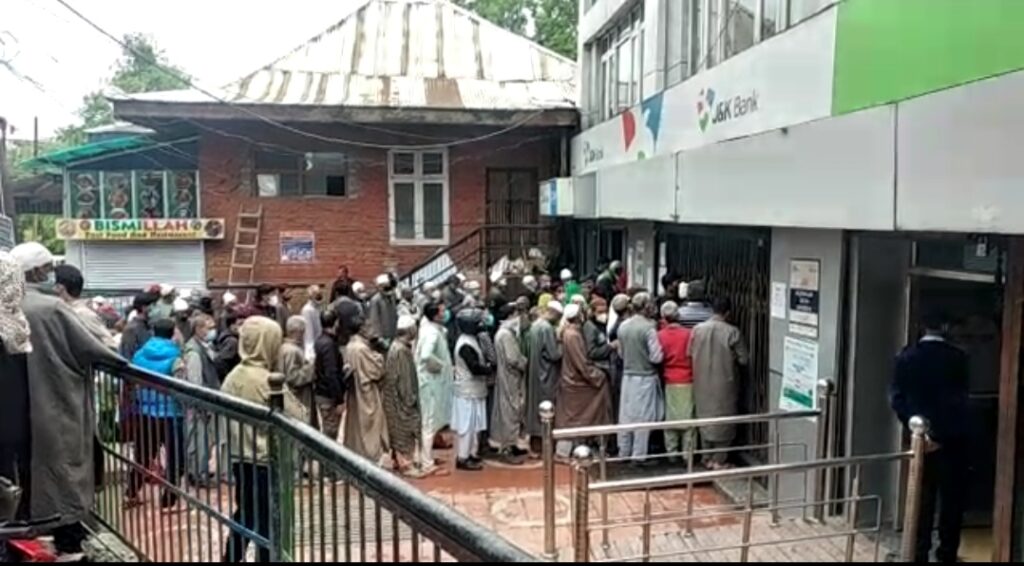 Srinagar, May 11: With a day or two remaining till Eid-ul-Fitr, people thronged markets despite the health risks amid rising number of covid-19 cases and fatalities due to the virus. On Tuesday, Jammu and Kashmir saw a record 65 people succumbing to the virus while 4352 people were confirmed to have contracted the infection based on the tests, according to the official statement.

The Eid celebration, the most important in the Muslim calendar marking the end of the holy month of Ramazan, is traditionally preceded by a rush to buy new clothes, mutton, chicken, gifts and sweets besides bakery items. However, as can been there was rush of people engaged in shopping particularly food items. Huge rush of people was seen at bakery, mutton and chicken shops.

Reports of huge rush in markets was received from central, north and south Kashmir. Eyewitnesses said that while most people were wearing masks, the covid-19 appropriate behavior as regards physical distance was thrown to wind at most places.

People who more conscious of the dangers of covid-19 demanded strictness in the lockdown by the administration to meet the endeavor of arresting the further spread of the covid-19 in J&K especially when health infrastructure has been nearly overwhelmed by the people needing hospitalization.

Meanwhile District administration Srinagar also clarified that “no relaxation” in ‘corona curfew’ has been announced by it.

“No partial relaxation announced by District Admin Srinagar. Order is amply clear. Misleading headlines can be seen in some Newspapers,” reads a midnight tweet by the district administration.

As per the order, “partial permissible” activities allowed from 8am to 12pm include “Retail & Wholesale Grocery Shops (excluding multi item departmental stores); Milk and Dairy products; Mandis, Shops & Street Vendors dealing with fruits and vegetables only and Bakery, Meat and Chicken Shops.”

The “permissible” activities allowed include chemists and druggists (both in retail and wholesale); Diagnostic centers, Medical ,optical and clinical establishments; LPG Outlets and Petrol Pumps; Restaurants in hotels for in-house guests, to be served only in the rooms; LPG Outlets and Petrol Pumps; Cattle feed and fodder shops; Agricultural activities including establishments dealing with agricultural inputs, implements and tools; cattle feed and fodder shops; FCI and FCS&CA depots; Operation and maintenance of telecom towers and other telecom infrastructure (on production of valid ID card); e-Commerce& Home Delivery of essential goods and services; All Industrial and Scientific establishments (both Public & Private); All development, construction works & mining activities; Movement of all Health, Medical & Sanitation personnel (Both Government and Private) on production of ID Cards; Routine vaccination drive in all designated sites along with additional sites for residential areas and containment zones; Interstate and intra state movement of essential goods; Officers and officials of J&K Government, Government of India, PSUs, Autonomous bodies, Universities, All India Radio, Doordarshan and other such offices on production of Department ID Cards/Official orders; movement of goods and essential supplies, nomads migrating with herds, Darbar Move Officials / staff, and other products like agricultural / horticultural goods, on the National & State Highways.

“There shall be a complete ‘Corona’ curfew with no movement of people except for permissible activities only,” the order.