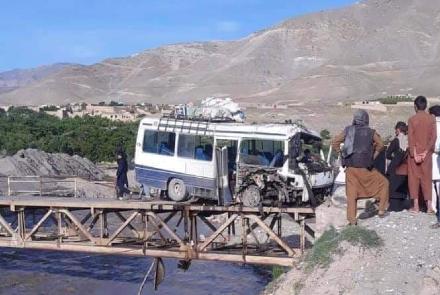 Kabul: At least 13 civilians were killed and 42 more were wounded in separate roadside bomb blasts in Zabul and Parwan provinces, Ministry of Interior and officials said, the Tolonews reported.

In Zabul, 11 civilians were killed and 28 more were wounded in a roadside bomb blast that targeted a passenger’s bus in Shahr-e-Safa district in the province on Sunday evening, Interior Ministry said in a statement on Monday, reports said.

The blast happened in Muskan Camp area in the district after a bus was targeted by a roadside bomb, the ministry said, adding that “the bomb was placed by the Taliban,” reports added.

Taliban, however, has not commented on the blast so far, reports said.

Meanwhile, two civilians were killed and nine more were wounded in a roadside bomb blast that targeted a bus in Pul-e-Matak area in Parwan province on Monday morning, health officials said.

“The wounded were taken to nearby hospital,” said Dr. Qasim Sangin, head of Parwan hospital. “Women and children are among the wounded.”

Five people were wounded in a blast in the area when people had gathered there after the first blast, Sangin said, adding that “three of the wounded are in critical condition.”

Security officials have have not commented on the incident.  No group including the Taliban has so far claimed responsibility for the blast. (Tolonews)