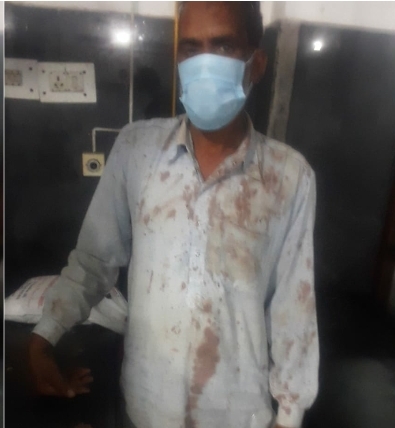 Srinagar, May 08: In a shocking incident, two men from Muslim Gujar community were attacked by vigilantes in Jammu district on Thursday night when they were returning to their home with a pair of oxen they had purchased from a neighbouring village.

Interestingly, the video of the incident has gone viral on social media, evoking tremendous criticism and anger as blood could be seen oozing from the wounds of injured men.

Muhammad Siddiq and his cousin Amir Hussain of Gorda village in Jammu district were injured by vigilantes when they were returning to their home alongwith a pair of oxen they had purchased a few days ago.

“We were attacked by a group of hooligans when we were returning home alongwith a pair of oxen. We pleaded with them that we are not cattle traders but they did not listen and thrashed us mercilessly. We were beaten up savagely,” says Muhammad Siddiq.

“They police came later and rescued us from their clutches. On seeing our condition, they later took us to hospital.”

Both the injured are presently undergoing treatment at Government Medical College, Jammu.

The attack on Gujjar men triggered widespread condemnation from different quarters with political parties and activists from the tribal community seeking punishment for the accused.

“We have arrested five persons in connection with the incident,” an official said.