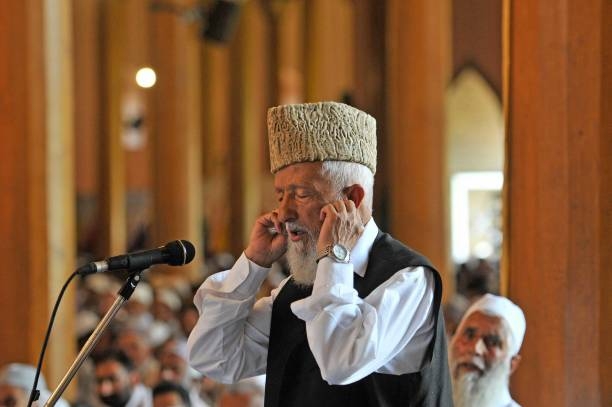 Anjuman Auqaf Jama Masjid srinagar expressed deep grief and sorrow over his demise and termed it a big loss for the religious fraternity of Kashmir especially those who would visit jamia Masjid. The Namaaz-e-Janaazah of late Yasin s was offered at 10.30 am before the congregational Friday prayers in view of the COVID 19 situation.

In the condolence meeting held by Anjuman Auqaf general secretary Haji Altaf Ahmad Bhat , rich tributes were paid to Moulvi Yasin Sahib for his six-decade-long sincere and selfless services to Jama masjid . Amid moist eyes, prayers were offered in favour of the departed soul. The services of the family of late Yasin sahab towards the Anjuman and Jamia masjid for past century were also recalled by the members.

During the meeting, members recounted that after his fathers death , late Yasin Sabab would uninterruptedly give the call to prayer , the “Azan “five times each day at the Jama Masjid. Auqaf members while paying glowing tributes to Moulvi Shah Sahib termed him a true Aashiq-e-Rasool (SAW) . They said that the sweet and melodious voice of the deceased used to attract thousands of namazis to throng the Jama Masjid on hearing his Azaan. Yasin sahab was a great naat khwan . His rendition of the Naat would so deeply move people spiritually and emotionally , that they could not control tears rolling down their faces , the meeting recalled .

On hearing about the demise of Molvi Yasin Sahib, Mirwaiz-e-Kashmir expressed deep grief and termed it a big loss for the people of Srinagar especially for those having association and devotion with Jama Masjid. He expressed condolence with the bereaved family and prayed for Jannat-ul-Firdous for Moulvi Muhammad Yasin Shah Sahib. He also regretted that he could not lead the janaza prayers of the deceased or pay tributes to his great services at the condolence meet of the Anjuman,nor express sympathy with the bereaved family personally.