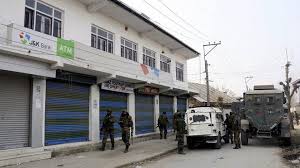 Reports said that few persons boarding a car forced their entry into the bank and decamped with an unascertained amount of cash.

Confirming the incident, a senior police official told a news agency that at least three gunmen donning PPE kits managed to flee with cash besides a 12 Bore rifle from the bank guard on duty.

The locals present there tried to caught them, however the suspected gunmen fired some shots in the air to create panic before running away from the spot, the official said adding that however the trio have left behind the vehicle.

Soon after intimation, a police team reached the spot and an alert has been sounded in the peripheries to nab the culprits, the official added. gns