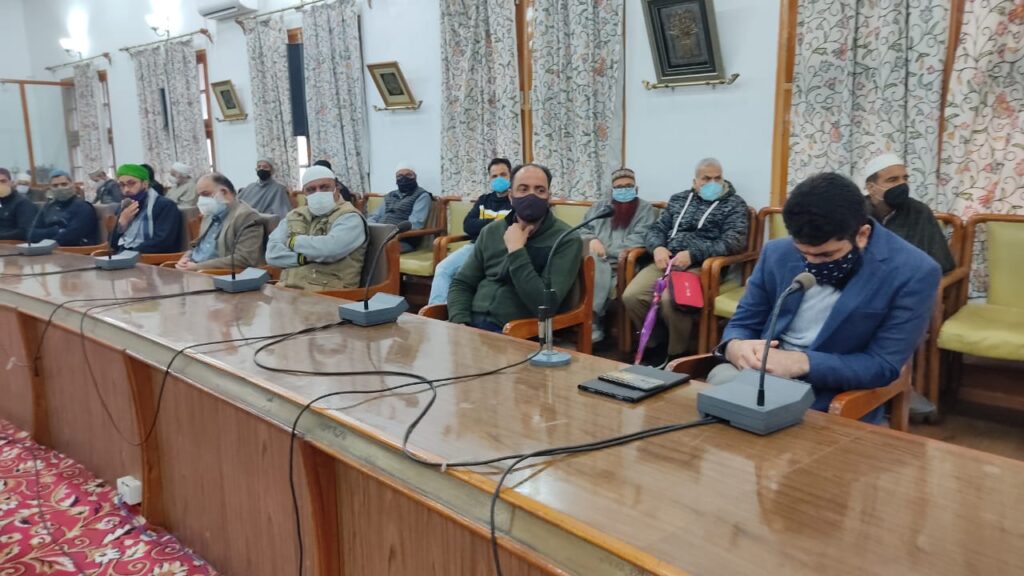 Srinagar, Apr 22: Deputy Commissioner Srinagar Aijaz Asad expressed his gratitude over the fact that Covid protocol is being followed in all major shrines and masjids of Srinagar stating that Ulema and Imams are well aware of the preventive measures that includes maintaining social distancing and avoiding use of skull caps kept at masjids.

After chairing a crucial meeting with the Waqaf Board officials, heads of all major shrines and Imams of various masjids of Srinagar at Banquet Hall here, DC Asad said that they deliberated on the evolving Covid situation.

“The meeting was held in a very cordial atmosphere and I am glad Ulema and Imams are fully aware of the Covid protocol which is being followed under their guidance in all shrines and masjids of the district,” Asad said. He said that many valuable suggestions came to fore during the meeting that includes maintaining social distancing during prayers and avoiding the use of skull caps that are kept in masjids.

“Ulema suggested that people should perform absolution at their homes before leaving for prayers as that would help avoid crowds in masjids,” he said.

He said all the Ulema and Imams agreed that the second floor of masjids can be used for prayers while following the social distancing. About whether the number of worshippers is being restricted to 50 in masjids, he said LG Manoj Sinha has passed the directions to DC’s and SSPs of districts to facilitate the worshippers at the masjids and so far there is no change in that order.

The DC Srinagar, however, urged the people to follow all preventive measures to plug the spread of the virus the way people did last year. “We need to follow the SoPs with proper discipline,” he said.

About the 50 per cent opening of markets in Srinagar and the resentment expressed by traders, the DC said that he had invited all the traders’ bodies before announcing the decision.

“We announced the decision to accommodate all views. In shopping malls and single lane markets, there is an alternate opening mechanism that needs to be followed,” he said, adding that if any trade body has missed the meeting, they can come and express their views. “Doors are open for talks and suggestions always,” he said. kno